What the hell was I thinking?

My Bus adventure has not even started yet and I’m already beginning to think this was a bad idea. Maybe the airline industry isn’t so bad after all.

There’s a town not far from home called Junction City. It’s mostly military, and in the 6 months I’ve been in Kansas I hadn’t yet found an excuse to go there. But that’s where the bus station is, so I got a friend to drive me down there and experienced it for the first time today. It had the feel of an old Route 66 Ghost Town.

The bus stop was no stop at all, It was a store of some kind called “Junk In the Trunk”. I think it’s like a secondhand store or pawn shop but in the 3 hours I’ve been here I haven’t actually seen anybody buy anything, so I don’t really know. 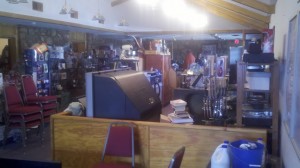 What I did see is that the store was filled with crap. There is a room in the back that is stocked with DVDs  of B Movies from years ago, the sort you throw away. There’s incense burning by the bathrooms, instead of a incense stand it’s in the slot of an active power strip, which in turn is balanced on what looks like a big speaker, with a drum set piled on top of it.

In the clearing near the center of the store, there are 4 kids, one infant, a toddler, two small children. I can’t tell whose they are. Next to the counter somebody was watching a Tyler Perry movie, and then when it ended they put on a Gross-Out Horror Flick.

The shopkeep himself doesn’t work for greyhound. Apparently he’s an authorized retailer or something. And he simply could not care less about what’s going on.

The bus arrived, a half an hour late and then wouldn’t let me on. Apparently it was full, and that was my problem somehow. They said I had to come back at 4am where I could catch another bus instead of the one I bought the ticket for.

To be clear, I wasn’t bumped. I wasn’t comped anything for my troubles; I’m not even entitled to a refund. I was simply told that I would not be allowed onto the bus I had scheduled to be on because… those are the breaks. Try again in the middle of the dang night!

So now I’m sitting back at the station trying to figure out what in the world I was thinking. I’m a college educated professional, taking a reimbursable business trip and here I am stick in a chicken shack in Junk City USA waiting for a guy to take me back home, so he can take me back here at an ungodly hour of the morning, so that I can hope that they weren’t also lying to my face about this next bus!

You have to understand I was raised mostly in a very wealthy part of Southern California (as opposed to the rest of southern California which is just regular-wealthy) I have no idea what I’m doing in an environment that says “yup, we’ll take your money but we absolutely do not care about you”

Still I’m trying to be missional in it. I haven’t raised my voice, I haven’t insisted on my rights (not to them anyway just to you readers) The good news is that the adventure’s begun, and it is sizing up to be more than I bargained for. If the rest of the trip is like this it will make for a rather interesting journal. 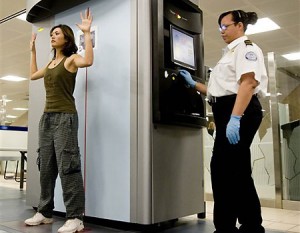 Bus: Why Am I Doing This?
archives most recent
More from Beliefnet and our partners
previous posts