Jay Sekulow: One Pastor Free – Another Still Imprisoned in Iran 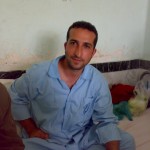 Some very good news to report.

Now, comes word of his release. That’s encouraging news. But we continue to work for the release of another Christian pastor, Saeed Abedini – an American citizen who remains imprisoned for his faith in one of Iran’s most notoriously brutal and abusive prisons.

Your prayers and support are vital as we continue to stand up for the rights of these Christians who face real persecution because of their beliefs. Stand with us. Find out more about these cases and how you can get involved. Check out this post from my son, Jordan, here.