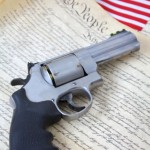 In 1995, U.S. Attorney General Eric Holder – who was serving as U.S. attorney for the District of Columbia at the time – attempted to bolster his anti-gun campaign by expressing his desire to launch a public relations campaign to “really brainwash people into thinking about guns in a vastly different way.”

That’s right – his words – “brainwash people” to oppose gun ownership. Ridiculous. Let me say from the start, the use of guns to commit violent crimes is simply unacceptable. And no one should glorify the improper use of guns. Period. But opposition to gun ownership simply cannot translate into excising the Second Amendment from the U.S. Constitution.

As I told Megyn Kelly on FOX News today, Holder’s comments about brainwashing people reflect his bias and raise important questions about his view of the Second Amendment.

As you might imagine, Holder’s comment about his desire to “brainwash people” when it comes to gun ownership generated sharp reaction. Rep. Peter King of New York called the comments one of Holder’s “many flaws.”

The remarks also brought a sharp rebuke from a top Congressman who is investigating the botched Justice Department gun-running program called Operation Fast & Furious – a program that Holder has refused to accept responsibility for – a program that took the lives of hundreds of people – including the murder of a U.S. Border Patrol agent.

House Oversight Committee Chairman Rep. Darrell Issa told The Daily Caller  that he’s not surprised, as Holder and many of his deputies come from an extremist anti-gun background.

“[Assistant Attorney General] Lanny Breuer, Eric Holder come from a wing – certainly Lanny Breuer led the charge on the assault weapons ban,” Issa said during an interview on Capitol Hill. “Many of the people in the chain of Fast and Furious have a disregard for Second Amendment rights and a belief that they have to limit beyond what the courts have upheld – people’s rights to keep and bear arms. So, it’s no surprise that insensitive statements like that would be made by now-Attorney General Holder.”

The Attorney General has a legal obligation to uphold the entire constitution – including the Second Amendment – whether he agrees with it or not.

Jay Sekulow: Message to Holder - NYPD Surveillance is Legitimate Response to Terrorism
archives most recent
More from Beliefnet and our partners
previous posts