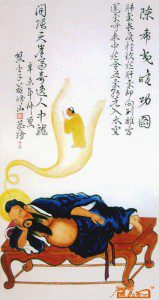 Chen Tuan (871-989) was a celebrated Taoist sage who lived a secluded life in mountain caves in China, where he created kung fu and a method of conscious dreaming. He was an ardent student of I Ching. He reputedly wandered the country in disguise, and sometimes provided warnings of impending events such as the flooding of the Yellow River.

Legend has it that Chen Tuan, won Mount Hua  – sacred to the goddess, and a center of Taoist practice up to the present day – at a chess game. Chen Tuan, beat Zhao Kuangyin, who later made good on his promise to deliver the mountain if he became emperor of the Tang dynasty Emperor, which he did in 960-976. Chen Tuan presided over a revival of Taoist practices, and is especially famous for his dream practice. There is a cave at the Jade Clear Spring Monastery where he lived his later years, and today it is a shrine with a statue of him in the classical dream practice pose (lying on right side, right hand supporting the head, like a sleeping tiger). His followers claimed he would lie in this position for days or even months while he flew about  in his dream body.

He taught that to dream well, we want to develop the practice of shifting attention from the physical to the subtle.  For neophytes, this is best attempted when you are not so tired you’ll just crash. Preparation includes releasing negative thoughts and  emotions and bodily complaints. There is a Taoist technique for that which centers on directing an “inner smile” to complaining parts of the body.

When we dream, the Taoist master taught, we enter realities beyond the physical. The core practice is to remain conscious as you relax your body in sleep position. You issue yourself a “sleep command” directing where you intend to go and what you intend to do. And you arrange your body in bed in the posture of a sleeping tiger.

The instructions for that can be given as follows:

Lie on your right side. Extend your left arm along your left leg. Your right hand may be cupped over your right ear, or tucked under the pillow. Bend your right knee. Leave your left leg  loosely extended. This posture shifts breathing to the left nostril and this is believed to activate right brain activity, facilitating strong visual and intuitive experiences and smoothing the way to states of brainwave activity associated with dreaming or meditation.

This posture is not unique to Taoists; it has been widely adopted and recommended in many dreaming traditions, sometimes as an ideal posture for entering death. The Buddha, at the moment of death, is depicted in Asian art as lying in the posture of the sleeping tiger.

Like tigers, a dream master may take plenty of “power naps” in the course of an day. This was a preferred technique of Chen Tuan. He would keep visitors waiting while he grabbed fifteen minutes in the sleeping tiger mode.  Chen Tuan is revered in Taoist tradition as “Ancestral Teacher”. He liked to call himself  Fuyao Zi, which means “one who soars high through the sky”, like a dragon or flying tiger.