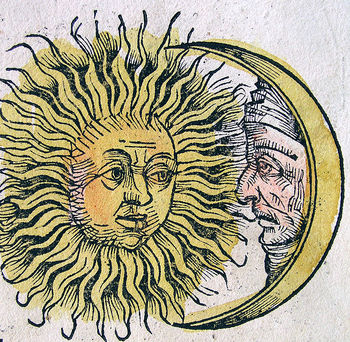 The night of a lunar eclipse – when the wolf eats the moon – is a time of extreme psychic dangers, for my blood ancestors in Europe and for the ancestors of the land where I live.

On a mountain in the New York Adirondacks, in a gathering of active dreamers, I sought counsel from the wise ones of the Onkwehonwe – the first people of this land – on the correct ritual to conduct as earth’s shadow fell across the moon.

An imposing native elder appeared at
the door of the lodge as we drummed to call in the ancestors. A whole party of warriors,
faces blackened for battle, waited behind him at the threshold, not intruding on our
circle.

The elder wore the feathered Iroquois headdress known as the gustoweh, crowned by the antlers that denote spiritual authority, because they rise above the physical head towards the spirit realm. He was clothed in deerskins. While I continued to drum, he spoke to me,
firmly and clearly.

During a lunar eclipse,he reminded me firmly, it is necessary to stay very close
to the Earth, grounded and protected. This is not the time for journeying, or
for partying. “This is the time when the Wolf eats the moon.” When the moon’s
light is hidden, there is a real danger of humans going crazy and behaving like
wolves. (A human who behaves like a wolf is very different from a wolf
following its nature.) This is a time to evoke the tempering, spiritualizing
influence of the White Wolf.

He directed my
attention to the huge warriors at the threshold. “They will protect you and
will attack those who attack you. They must be fed.” I quickly promised to give
them tobacco. The elder made it plain the guardians wanted something more: they
wanted meat, raw meat with plenty of blood in it. Best freshly slaughtered, but
we could see what we could arrange with the kitchen.

I felt blessed by
the presence of the ancient ones. We followed the elder’s directions in the
ritual we developed. In the morning, I made an offering to the warriors – a
juicy prime sirloin from the kitchen, and tobacco, and a little firewater. In
the evening, as the Earth’s shadow fell across the moon, we formed the shape of
a hexagram. We had made its outline on the frosty grass with cornmeal before
the light went, and appointed the dancers who would take the points of the
hexagram, so we could find our places easily. As the moon’s brightness darkened
into burned umber, we danced and sang the same words over and over. Words that
honor the Earth as our Mother and help us to find our grounding.

Our breath made steam in front of our faces. We sensed
wilding spirits and forces of confusion as the shadow swallowed the moon. They
took form as a feral wolf-pack. We continued singing. Then, like a shadow of
light, the White Wolf appeared, containing and gentling the wildness of the
pack.

We danced until
the return of the light. The sun’s light, reappearing at the bottom of the
moon’s disk, rolled up like a drop of liquid gold over the face of a bronze
mirror.

This is my journal account of a ceremony I led during the lunar eclipse in November, 2003.

Last night, I stayed quiet at home. I watched the first quarter hour of the eclipse through a haze of clouds, then the clouds thickened. I stayed up all night, keeping vigil, and did not go to sleep and dream until dawn.

Tonight will be the time for celebration. The sun stops at 6:38 PM Eastern time today, and begins its slow return (in human perception) from the South lands towards the North. Tomorrow, there will be an extra two seconds of daylight. On Thursday, the day will be longer by all of eight seconds.

For modern city-dwellers, these may be trivial details, but for our ancestors, they were of the essence. At the solstice, they poured wine and beer and mead and the blood of animal sacrifice to hail the rebirth of the sun – personified as male for some, female for others (as for the Sami, the Balts and the Japanese). The Romans moved the day of celebration forward to December 25, which was not the birth date of Jesus until the Church decided to steal the glamor of the ancient ways.
read next post

Dreaming on the longest night, when the wolf eats the moon
archives most recent
More from Beliefnet and our partners
previous posts