Dreaming on the longest night, when the wolf eats the moon 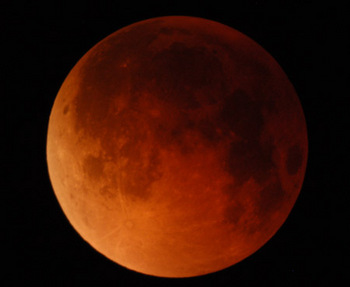 The winter solstice is one of the great ritual events of the Northern year. At Newgrange, the great megalithic site in Ireland, older than Stonehenge and the pyramids of Egypt, a light box was constructed so that at dawn on the winter solstice the first shaft of sunlight would strike deep into the inner chamber, illuminating a stone basin that may have been a place of magical requickening.
The time of the longest night, before the sun turns back, was an edgy time for early peoples. A time when the power of the dark side is at its greatest. It was observed by western Slavs as Korichun, the time when the old sun god is defeated and killed by the Black God and the powers of darkness rule on earth until the birth of the new sun. Through this time, humans sought to call back the light by burning fires and by performing a chain-dance, in honor of the dying and reborning god.
Our early ancestors would have regarded tonight as an especially edgy time. For the first time since the 17th century, we will see the eclipse of the full moon on the eve of the winter solstice. Early peoples feared the time when the earth’s shadow erases the moon as a window for dark powers to intrude on humans. The Chinese fired guns at the lunar eclipse in an effort to scare away demons and evil spirits. An Iroquois friend describes the lunar eclipse as “the night when the wolf eats the moon.”
In a world lit by artificial fires, most of us are less sensitive to events in the night sky than our ancestors. All the same, our passage through the eclipse of the full moon, on the longest night of the year, may make all of us more ready than ever to hail the return of the sun. This is when the Sami, whose reindeer shamanism may have given us the first Santa, make offerings to Beiwe, the sun-goddess who revives the fertility of humans and of earth, to call her to come riding back through the sky in her chariot of reindeer bones. In the I Ching, the Chinese oracle, the hexagram associated with the winter solstice is #24, Fu, or Turning Back. It indicates that “the light that was banished is returning” and “the dead king rises again.”  We are on our way to Christmas, which the ancients would have recognized as a chapter in a never-ending story of a god-man who dies and is reborn.
Dreamers tonight may want to invoke spiritual guidance and psychic protection, and review their dream content with an eye to the old belief about the qualities of the longest night and the lunar eclipse. After the solstice tomorrow, however, will be an excellent time to dream consciously on the year ahead.
Lunar eclipse image from Grasslands Observatory
read next post