Hope: From Nevermore to Evermore 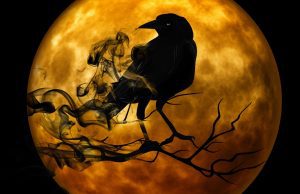 If you have ever read the poem by Edgar Allan Poe,The Raven, then you familiar with the story of a distraught lover’s descent into despair. The raven, a bird that comes tapping on the chamber door of a grieving man, is famously quoted as responding to the man’s grief by saying, “Nevermore.” The poem is about death and the pain of loss. Nevermore, will he see or be with his love again. Time has stolen his wife and life. He must live in the “nevermore.”

Many of us have experienced devastating loss in which the “nevermore” cannot be recaptured. How do we respond to the dark voice of the raven reminding us of what looks like permanent loss? Do we make a dark descent into madness or can we find hope?

The last book in the Bible, Revelation, reminds us to hope. In the first chapter, Jesus tells us not to fear because of the “evermore” we will experience through his death and resurrection. When Christ was crucified on Good Friday, he appeared to be in the “nevermore.” His disciples and friends were devastated. Nevermore, would they see their beloved Lord.

But on Easter morning, the story changes. Jesus triumphs over death. What looked like a “nevermore” to those women who came to the tomb on Easter morning, turned in to an evermore. They soon realized, He was not in the grave, but alive. He had risen as He said and is alive. And because of His resurrection, we are promised the evermore to come.

Every day of the year, we need to remember to not fear pain and loss because God is in control. Nothing happens away from His watchful eye no matter how much suffering there is. While there are times it feels like the nevermore will overwhelms us, don’t give in to despair because Jesus defeated the nevermore. We live with the promise of the evermore or the forever more. More is to come– reunions with those we love and a time when suffering and pain will be no more. In the end, the despair of the nevermore must give way to the evermore.

So grieve and mourn your losses, but also remember the hope we have because our God is alive. The nevermore will one day give way to the evermore and we will live again, forever.