Using herbs for depression has for centuries been the norm for many cultures. In fact, using herbs for depression is sometimes preferred to using antidepressants. People throughout time have found that certain herbs have healing properties for depression. Of all healing herbs, adaptogenic herbs are considered to be top performers. Adaptogenic herbs are non-toxic. They have the ability to help your body resist stress, whether its physical, chemical, or biological. These herbs give you strength, energy, endurance, and improve mental clarity. 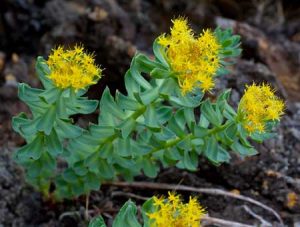 Like the name suggests, this herb is found in cold regions. Arctic root grows in the high altitudes of the Arctic and the mountains of central China where its cold.

Arctic root is adaptogenic herb. Adaptogen is a natural substance found in herbs that works to counteract stress in the body. Stress causes chemical changes in the brain, endocrine system, and immune system. Adaptogenic herbs have stimulant properties that counteract those harmful effects.

Arctic root is helpful in fighting depression and improving brain activity. Arctic root is especially useful for depression that has anxiety and fatigue. It’s also good for reducing the effects of SAD (seasonal affective disorder). There is research showing that arctic root reduces depression symptoms faster than antidepressants.

Arctic root is a fantastic belly fat burning herb. Increased body fat is one symptom of depression and anxiety, so arctic root can help with that situation. But be aware, arctic root may lower blood sugar levels. So monitor your blood glucose levels. It may also alter your blood pressure. 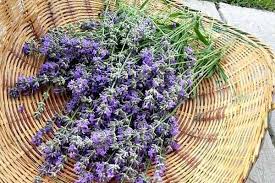 Lavender is a strewing herb. Botanically speaking, lavender is a flowering shrub and a herb used in cooking, oil, and aromatherapy. Lavender is one of those flowers that you can eat and use on your skin. Lavender is used for healing because it has no real side effects. It’s safe to use for humans and animals. Lavender is non-addictive, even though it acts much like benzodiazepines, which are addictive.

Lavender flowers contain a volatile oil which has a rejuvenating scent. Lavender is known for improving mood and reducing anxiety. Research shows that lavender is as effective as Ativan (lorazepam) in treating anxiety and helping with depression symptoms. It is a non-drug alternative for depression and anxiety in some societies.

Among the flower remedies for depression, lavender essence is the one most strongly recommended. Pour 2-3 drops of this essence into your bath water or simply add it to aroma lamps. Make lavender tea, sleep pillows, sachet bags or potpourri. Lavender helps with depression insomnia because it increases slow-wave sleep, slows heartbeat, and relaxes muscles. 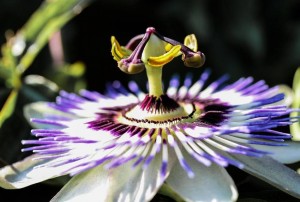 Research has shown that passion flower can reduce depression. Scientists believe passion flower works by increasing levels of a brain chemical called gamma aminobutyric acid (GABA). When levels of GABA are increased, it decreases the activity of depression inducing cells like monoamine oxidase. This is what antidepressants do.

Be careful when using passion flower. Blue passion flower (Passiflora caerulea) is somewhat poisonous to both humans and pets. Passion flower can also have harmful side effects when taken with certain medications and alcohol. It’s okay to take passion flower in small amounts, but large amounts can cause confusion, dizziness, and drowsiness.

Ashwagandha, or Indian Ginseng, is another adaptogenic herb. It’s used in Indian Ayurvedic healing to help the body deal with daily stress. Ashwaganda means “the smell of a horse.” Its said that the root does smell like horse sweat.

Ashwagandha is known for its ability to reduce the levels of cortisol, commonly called the stress hormone, which increases during stress and anxiety. The herb has been shown to prevent stress related gastric ulcers, and weight gain of the adrenal glands from chronic stress. Ashwagandha helps relieve insomnia that comes with depression. Ashwagandha is also used to reduce blood sugar levels and body fat. It also lowers blood pressure. However, there are some side effects to Ashwaganda. These include arthritis, constipation, skin conditions, and gastrointestinal issues. Be sure to tell your doctor if you are taking Ashwaganda, as it might decrease the effectiveness of some sedative medications like Xanax, Dalmane, Ativan, and Valium. 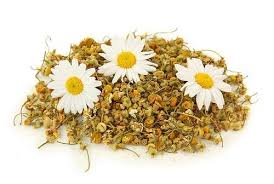 Chamomile belongs to the daisy family and is a multipurpose healing herb. It is used for reducing swelling, calming aches and pains, and treating stomach aches. Dried chamomile leaves are used in tea. One to two cups of chamomile tea per day is usually enough to see an improvement in health. If you have pollen allergies, be careful with chamomile as the leaves can be contaminated with pollen from other plants.

Chamomile is useful in treating depression and anxiety because it acts as a mild sedative. Chamomile has an antioxidant called apigenin, which binds to receptors in your brain which start the sleep cycle. Chamomile also increases glucose levels, helping to relax the nerves and muscles of your body. So sipping on chamomile starts a chemical reaction that lets you drift off to sleep and calm your mind. In this sense, chamomile acts like a benzodiazepine. Benzodiazepines are drugs that reduce anxiety and help you fall asleep. Research suggests that chamomile binds to benzodiazepine receptors. 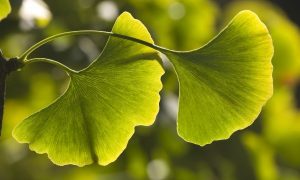 Ginkgo is an adaptogenic Chinese herb that’s been used for centuries to open energy channels of different organ systems. Ginkgo is best known for improving memory and focus. This is because ginkgo increases blood circulation to the brain, and protects the brain from neuronal damage with an anti-inflammatory compound. It’s the anti-inflammatory compound that gives ginkgo its many healing abilities.

Ginkgo has been used to treat headaches and migraines, two things that are common symptoms of depression. Ginkgo also reduces stress and anxiety by lowering cortisol levels. Research shows that people who use ginkgo experience reduced anxiety compared to people who use placebos. 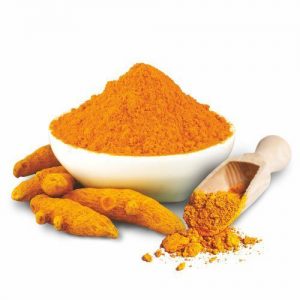 Tumeric is part of the ginger family. You may know turmeric as the main spice in curry.  Tumeric contains a yellow chemical called curcumin, which is a curcuminoid. Curcuminoids have powerful anti-inflammatory effects and are a very strong antioxidant. Curcumin shows promise as a depression treatment because it elevates serotonin while lowering stress hormones like cortisol.

Tumeric has been found to reduce symptoms of major depressive disorder (MDD). Not only does turmeric act like an antidepressant, its curcumin has been found to increase nerve growth in the brain’s frontal cortex and the hippocampus. These areas are important in mood because when they aren’t functioning at full potential, severe depression occurs.

Cations against using turmeric are if you have gallstones or are pregnant. Curcumin can also interfere with chemotherapy chemicals used to treat breast cancer. Be sure to ask your doctor if you can take turmeric if you have any of these conditions. 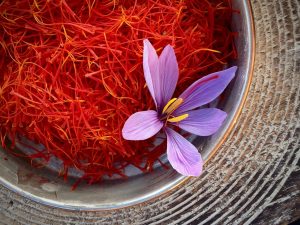 Saffron comes from the stigmas of the purple saffron crocus. It has to be hand picked because the stigma is so delicate. Because it’s so labour intensive, saffron is one of the most expensive and rarest spices in the world.

Research shows that saffron is as effective for depression as Prozac. The exact reason for this isn’t known yet, but saffron is a promising alternative to the harsh chemical.

Saffron is also helpful in reducing stress, anxiety, OCD, and PMS. High doses of saffron should be avoided by pregnant women.

Herbs as an alternative to antidepressants.

Herbs for depression are generally safe, side effect free, and not very expensive. Herbal remedies can be given to children, pregnant women, and elderly people. The key to using herbs is finding the one that matches the type of depression you have. Does your depression include anxiety, fatigue, sleepless nights, appetite loss, and changes in body weight? A single herb may not work for all symptoms. You might need to combine herbs. It’s best to ask a licensed herbalist what’s best for your particular set of symptoms. Also, always let your doctor know you are trying herbs for depression. Herbs work on mild to moderate depression. It’s not proven effective for severe depression, self-harm or suicidal thoughts. If you’re on antidepressants, you shouldn’t stop using them without first consulting with your doctor. Most herbs don’t interfere with antidepressants, but there’s always the exception.