Why a priest should wear the collar 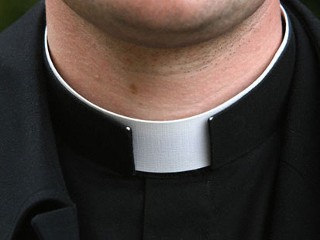 How often do you see priests without collars? (Can you even tell?) Why should they wear them?  I stumbled on this compelling explanation. (Full disclosure: It was written by two priests. I know one of them, Fr. Gerald Murray, who’s been on a guest on “Currents” a time or two).

Take a look, and share it with a priest you know:

#1 The Roman collar is a sign of priestly consecration to the Lord. As a wedding ring distinguishes husband and wife and symbolizes the union they enjoy, so the Roman collar identifies bishops and priests (and often deacons and seminarians) and manifests their proximity to the Divine Master by virtue of their free consent to the ordained ministry to which they have been (or may be) called.

#2 By wearing clerical clothing and not possessing excess clothes, the priest demonstrates adherence to the Lord’s example of material poverty. The priest does not choose his clothes – the Church has, thanks to her accumulated wisdom over the past two millennia. Humble acceptance of the Church’s desire that the priest wear the Roman collar illustrates a healthy submission to authority and conformity to the will of Christ as expressed through his Church.

#3 Church Law requires clerics to wear clerical clothing. We have cited above number 66 of the Directory for priests, which itself quotes canon 284.

#4 The wearing of the Roman collar is the repeated, ardent desire of Pope John Paul 11. The Holy Father’s wish in this regard cannot be summarily dismissed; he speaks with a special charism. He frequently reminds priests of the value of wearing the Roman collar.In a September 8, 1982 letter to Ugo Cardinal Poletti, his Vicar for the Diocese of Rome, instructing him to promulgate norms concerning the use of the Roman collar and religious habit, the Pontiff observed that clerical dress is valuable “not only because it contributes to the propriety of the priest in his external behavior or in the exercise of his ministry, but above all because it gives evidence within the ecclesiastical community of the public witness that each priest is held to give of his own identity and special belonging to God.”In a homily on November 8, 1982 the Pope addressed a group of transitional deacons whom he was about to ordain to the priesthood. He said that if they tried to be just like everyone else in their “style of life” and “manner of dress,” then their mission as priests of Jesus Christ would not be fully realized.

#5 The Roman collar prevents “mixed messages”; other people will recognize the priest’s intentions when he finds himself in what might appear to be compromising circumstances. Let’s suppose that a priest is required to make pastoral visits to different apartment houses in an area where drug dealing or prostitution is prevalent. The Roman collar sends a clear message to everyone that the priest has come to minister to the sick and needy in Christ’s name. Idle speculation might be triggered by a priest known to neighborhood residents visiting various apartment houses dressed as a layman.

#6 The Roman collar inspires others to avoid immodesty in dress, words and actions and reminds them of the need for public decorum. A cheerful but diligent and serious priest can compel others to take stock of the manner in which they conduct themselves. The Roman collar serves as a necessary challenge to an age drowning in impurity, exhibited by suggestive dress, blasphemous speech and scandalous actions.

#7 The Roman collar is a protection for one’s vocation when dealing with young, attractive women. A priest out of his collar (and, naturally, not wearing a wedding ring) can appear to be an attractive target for the affections of an unmarried woman looking for a husband, or for a married woman tempted to infidelity.

#8 The Roman collar offers a kind of “safeguard “for oneself. The Roman collar provides a reminder to the priest himself of his mission and identity: to witness to Jesus Christ, the Great High Priest, as one of his brother-priests.

#9 A priest in a Roman collar is an inspiration to others who think: “Here is a modern disciple of Jesus.” The Roman collar speaks of the possibility of making a sincere, lasting commitment to God. Believers of diverse ages, nationalities and temperaments will note the virtuous, other-centered life of the man who gladly and proudly wears the garb of a Catholic priest, and perhaps will realize that they too can consecrate themselves anew, or for the first time, to the loving Good Shepherd.

#10 The Roman collar is a source of beneficial intrigue to non-Catholics. Most non- Catholics do not have experience with ministers who wear clerical garb. Therefore, Catholic priests by virtue of their dress can cause them to reflect – even if only a cursory fashion – on the Church and what she entails.

And that’s just for starters. There are more than a dozen other good reasons. Check ’em out.