The City of Angels welcomes new deacons — and their wives 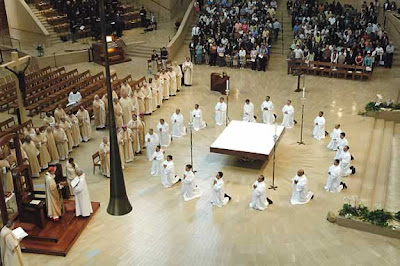 An alert reader sent this my way: an article from The Tidings, the Catholic paper of Los Angeles, on the ordination of deacons there last week. Read closely — there are some interesting details about the ceremony and the inclusion of the deacons’ wives:

The recent liturgy of ordination to the diaconate honored the ministry of presence which is primary to the vocation of permanent deacons.

Nineteen men were ordained as permanent deacons at the Cathedral of Our Lady of the Angles June 7 before a congregation of more than 2,500 faithful.

During the nearly three-hour liturgy, Cardinal Roger Mahony, main celebrant, prayed for the blessings of the Holy Spirit to be poured forth on this class of deacons known as St. Ignatius.

“May there abound in them every Gospel virtue,” said the cardinal, “love, concern for the sick and poor, unassuming authority, the purity of innocence and the observance of spiritual discipline.”

After the Scripture readings were proclaimed in Spanish, Korean and English (representing the native languages of the deacon candidates), Our Lady of the Angels Auxiliary Bishop Edward Clark said in his homily that the essence of the diaconate is the ministry of presence.

“The spirituality of the deacon is different than the spirituality of the priest. The life of the deacon is immersed in secular society. By word and example, by their very living, he relates to the citizens of the world,” said Bishop Clark. “Yet by holy orders he is able to focus on the presence of God in the world of creation and human endeavors and so lead his fellow citizens to discover the presence of God in the world.”

Being present to a changing world, added the bishop, “requires both attentiveness to the signs and needs of the times, and a willingness and readiness to learn and to prepare and to adapt and to grow. Learning isn’t over with ordination. It just begins.”

Following the homily, the ordination continued with the promise of the elect to serve the archdiocese and their parish, and the promise of obedience to Cardinal Mahony and his successors. Then the deacons prostrated themselves on the ground facing the altar during the litany of supplication as a sign of humility before God. The cardinal also laid his hands on each man and then offered the prayer of ordination.

The sign of peace was offered to each deacon by Cardinal Mahony, auxiliary bishops, priests and deacons. In addition to Bishop Clark, auxiliary bishops present were Alexander Salazar, Oscar Solis, and Gerald Wilkerson as well as Gregorio Rosa Chavez of San Salvador. 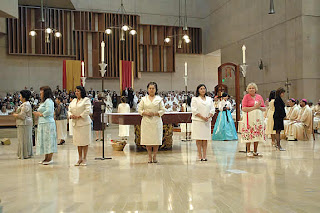 Many parishes refer to the deacons and wives as “deacon couples,” and the significance of deacon spouses in supporting their husband’s call to the diaconate was evident at the ordination Mass.

As the cardinal presented each deacon with a Book of Gospels, each man returned to his wife and gave her the book to hold as a gesture of inclusion. Following the prayer of ordination, parish pastors and deacon wives assisted the deacons to put on their wide-sleeved dalmatic.

Following Communion, formation coordinator Jennifer Ocegueda-Reynosa of the Office of Diaconate Formation, called deacon wives up to the altar to acknowledge the five years of study the women completed alongside their husbands.

“They have developed into enormously gifted women. They are now ready to serve the church as professional ministers in a variety of ways,” said Ocegueda-Reynosa. “They greatly enrich the formation program and will be a real blessing for the communities in which they will minister.”

The wives were presented with a certificate of formation and participation by Cardinal Mahony after which the congregation broke into applause and a standing ovation.

This is all well and good, I suppose, but does anyone else feel a twinge of discomfort at the way the wives have been elevated to being, in effect, “co-deacons”? I was also under the distinct impression that part of the ordination ritual — the vesting of the ordained — could only be done by someone who is himself ordained, a priest or deacon. Wives — or siblings or parents or even vowed religious — shouldn’t be a part of it. Methinks Mahony & Co. are blurring the lines here. Or maybe even trying to erase them.

Photo: by Victor Aleman, The Tidings

Homily for June 15, 2008: 11th Sunday in Ordinary Time
archives most recent
More from Beliefnet and our partners
previous posts