I just got back from two weeks in Florida on vacation, and in between spending time with Mickey Mouse, and a few of his friends, I did something a little unusual: I attended the first mass of a newly ordained priest. 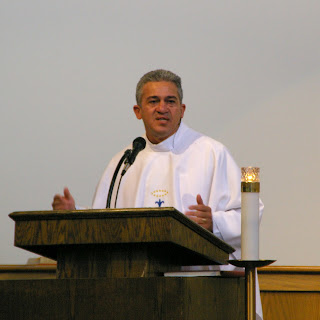 The priest, Fr. Hector Vasquez, had been ordained the day before, in Orlando’s cathedral. Fr. Hector is 43, but it was clear from seeing him on the altar that he was born to be a priest. He began the mass with the sign of the cross and then asked everyone in the congregation: “Okay, who here this morning is nervous?” He raised his hand and the congregation roared.

He gave a sweet, very warm homily about the house built on rock – and the need we all have to make our faith strong. And when the moment came for the consecration, and he raised the host, the body of Christ, in his hands, you could see the wonder and love in his face. All of us there became witnesses to a miracle of faith, and commitment.

The Diocese of Orlando, like so many in the country, is facing a serious shortage of priests. Fr. Hector was one of only two men ordained to the priesthood in Orlando – just like in our own diocese of Brooklyn.

I couldn’t help but think of Fr. Hector when I read this weekend’s gospel. “The harvest is abundant but the laborers are few. So ask the master of the harvest to send out laborers for his harvest.”

We hear this passage and of course, traditionally, we think of priests, or deacons, or those in the consecrated religious life. They are seen as the laborers in God’s vineyard.

But I would like to challenge you this morning to think of this passage differently. And I speak as someone who spent over 40 years of my life, like you, in the pews, nodding off while someone up here, like me, told you to pray for vocations.

And I am looking at them right now. They are next to you, and in front of you, and behind you.

Too often, I think, we tend to shrug off the idea of vocation as something intended for somebody else – somebody holier, or younger, or somehow just “different” from the rest of us.

It’s interesting to read this gospel and realize that Jesus didn’t just summon the 12 and tell them to spend their lives in a quiet corner, praying.

He sent them out. He sent them into the world. This is where the great work of spreading God’s kingdom happens. Cloisters are beautiful things – great workshops of love and charity. But the gospel was spread – and is spread – heart by heart, voice by voice, action by action.

It happens on subway platforms and in supermarket aisles and in office cubicles. It happens in classrooms and construction sites, in airports and post offices. It is anywhere one Christian comes in contact with another and manages, in some small but discernible way, to make Christ present in that moment.

It is how the kingdom is spread. And it can happen anywhere.

Even, I think, in television.

Like a lot of people, I was saddened yesterday to learn of the death of Tim Russert. Journalism is poorer without him. I never had the privilege of meeting him, or working with him, but I know a lot of people who did, and they have talked a lot over the last two days about his passions. He loved the New York Yankees, and the Buffalo Bills. He loved his family and politics.

And he loved his faith.

I also work in television news, and I find myself many days despairing over what is happening to the business. I told someone not long ago that I feel sometimes like a missionary in Africa – hoping that I don’t get eaten alive by the cannibals.

But then I look at someone like Tim Russert — a man whose faith imbued his work, and animated it. He managed to make the kingdom of God present, even on the Sunday talk shows. It was there in his sense of fairness, and his quest for the truth, and the decency and respect he showed to all those he interviewed.

And it was there, too, in his devotion to his family.

Many years ago, when his wife struggled to give birth during a difficult delivery, he went to a nearby church. And he made a promise to God that if his baby was born healthy, he would never again miss mass. His son came through it, and Tim Russert kept that promise. He named his son Luke, after the patron saint of physicians. And not long ago in an interview he said he liked to remind Luke of the gospel of Luke: “To whom much is given, much is expected.” Tim Russert was given much by the nuns, the Sisters of Mercy, who taught him in Buffalo all those years ago, and he never forgot it, and often spoke out passionately about the importance of Catholic education. He tried to live what he was taught, in whatever way he could.

This morning I read an interview with the journalist Howard Fineman, who is Jewish, and who said if he ever thought about becoming Catholic, Russert would be the best advertisement for it. Fineman said that he worked in a town, Washington, with many false gods, but that Tim Russert always sought the real one.

He’s an example, I think, of one ordinary layman who labored to reap God’s harvest. How many others are here in this church today?

Ask yourself: what is God calling me to do in his fields? Could anyone here be the best advertisement for the faith?

We need more priests. We need more Fr. Hectors. But we also need more Tim Russerts, too: more men and women and children and young people who will each, in their own way, go out into the world, to live the gospel. They will remind those they meet that to whom much is given, much is expected.

Our lives can be a proclamation, a profession of faith, one made not just with words, but with choices and actions. In everything we do, we can say to all those we meet: “The kingdom of heaven is at hand.”

That is the great work ahead.

The fields are waiting for us.

What are we waiting for?