One of the most famous — some might say, infamous — religious orders in the world is getting something of a cold shoulder from the Archbishop of Baltimore.

Demanding what he calls greater “transparency and accountability” from the controversial religious order known as Legionaries of Christ and their associated lay movement, Regnum Christi, Archbishop Edward O’Brien of Baltimore has directed both groups to disclose all activities within his archdiocese, and to refrain from one-on-one spiritual direction with anyone under 18. 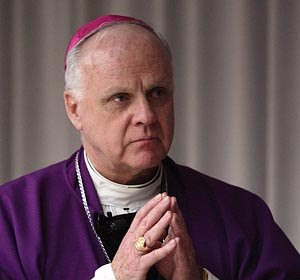 The ban on counseling minors, O’Brien said in an interview with NCR on Wednesday, is related to concerns that the Legionaries and Regnum Christi practice “heavily persuasive methods on young people, especially high schoolers, regarding vocations.”

Both the Legionaries of Christ, a religious order of priests, and the lay-led Regnum Christi are typically seen as part of a galaxy of “new movements” within Catholicism. Both are known for missionary zeal, as well as staunch traditionalism in faith and practice.

In a June 11 interview on the margins of the spring meeting of the U.S. bishops in Orlando, Florida, O’Brien said he’s prepared to take the “next step” of barring the Legionaries and Regnum Christi from the archdiocese entirely if they do not comply.

The directives came in the form of a June 6 letter from O’Brien to Fr. Alvaro Corcuera Martínez del Río, the Superior General of the Legionaries. They cap a lengthy series of contacts between the Legionaries and the Baltimore archdiocese, O’Brien said, which began under his predecessor, Cardinal William Henry Keeler, who resigned in July 2007 at the age of 76.

In a two-page letter, O’Brien instructed Corcuera to appoint a Legionary priest who can serve as a liaison with the Baltimore archdiocese. That priest, O’Brien wrote, must provide:

O’Brien wrote that the priest-liaison should inform all pastors of parishes where groups connected to the Legionaries or Regnum Christi are active, and keep pastors informed about any changes in those activities.

With a specific eye to work with youth, O’Brien directed that the archdiocese is to be informed of any summer programs for young people run by the Legionaries or Regnum Christi, including the names of participants. He also asked to be notified of candidates for the priesthood or religious life from the archdiocese who intend to enter a Legionary high school seminary or boarding school, saying that the information will be reviewed “with the parents and pastors of those candidates.”

“I want to ensure that encouragement of vocations is carried out in a way that respects the rights of parents in the upbringing of their children and the rights of young persons themselves to be able to make free and fully informed decisions about their futures,” O’Brien wrote.

Finally, O’Brien asked to be updated every six months about the activities and objectives of Legionary and Regnum Christi groups in the archdiocese.

There’s much more, including links to documents. Check out the rest of Allen’s piece for details.