When was the last time you had a full serving of vegetables? At your last meal? Maybe yesterdays dinner? If so, you are beating out a chunk of the American population. As it turns out, one in four of never had a vegetable at all.

In a survey, which was commissioned by VeggieTracker.com by Dr. Praeger’s, about a quarter of respondents said that they have never eaten a vegetable at all, which is pretty telling of the American diet. The survey collected answers from 2,000 people.

Of those who did eat vegetables, though, it was found that veggies were only included in a third of all meals. While this is low for the amount we should be eating, the survey did find that most are motivated to eat more. Nearly three in four (72%) of Americans admit they wish they ate more vegetables than they do currently. Similarly, 67% say they feel guilty when they don’t have any produce with their meal.

“Most of us already know they should be eating more vegetables. While more and more people are adopting plant-based diets, there’s still a long way to go toward reaching recommended consumption levels,” says Larry Praeger, CEO of Dr. Praeger’s, in a statement.

The survey also asked participants why they didn’t eat more vegetables. The highest answer was because the produce went rotten before they had a chance to eat it at 25%. Next was that that people felt that vegetables were too expensive to buy. Another 22% found veggies take too long to prepare, and 20% weren’t sure how to cook vegetables or how to make them taste better.

Of those surveyed, they found that the most popular vegetable was corn. A total of 91.4% of those asked said that they enjoyed eating corn, with potatoes coming in at a close second with 91.2%. Carrots and tomatoes were tied at third with 89%, and the least favorite vegetable by far was turnips. 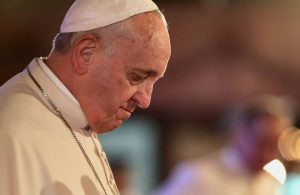 Pope Francis: Overeating is an "Avenue of Personal Destruction"
archives most recent
More from Beliefnet and our partners
previous posts