When Christian Leaders Say, “Jump!” Do We Leap?

“If any of you is lacking in wisdom, ask God, who gives to all generously and ungrudgingly, and it will be given you.” James 1:5

For many years, my literary junk food was celebrity people magazines. Once every two weeks I headed to the library, grabbed a stack, and caught up on all the latest news of the British Royal Family, heart throbs of my adolescence, and (my favorite) shots of female stars make-up free and sloppily attired.

Even after I awoke from the delusional trance of the American Dream and Christian Utopia on Earth (promised from the pulpit, if only we “have enough faith” and “work together as a community”), I still snuck the magazines in, like guilty spoonfuls of ice-cream snatched over the kitchen sink. But eventually, like the bad eating, I realized that I never felt happy, content, hopeful, encouraged, or confident after I read these things.

(By the way, Baptist sorts, I wasn’t laboring under the guilt of sin, condemning myself for worldly, evil thoughts; I was just putting commonsense into place.)

And one day, it snapped — and I lost all interest. Perhaps it was the sight of my adolescent heart throb, who at 37 was so sexy to my 17-year-old eyes, but now looked (and talked!) disturbingly like my late, elderly father-in-law. I no longer cared about these people, none of whom I knew personally, and all of whom inhabit a world that is so far out of my sphere that we have remarkably little in common. If I and one of their domestic staff met in the aisles of a grocery store, well, the staff member and I would probably have something in common — but I and the celebrity are poles — and neighborhoods — apart.

So it is within the industrial Christian complex, which really should publish a celebrity magazine of its own, focusing on the prophets and teachers and evangelists and names and holy faces that millions of Christians come to follow, and worship, as being wiser, more righteous, and blessed than the rest of us: they’re rich and well-known, after all — surely that must be a sign of God’s favor?

(If only Jesus had grasped the secret of their success. He could have really made something of Himself, you know?)

Like the Sexiest Men of the Year of the 70s and 80s, many of these celebrities are entering into their 70s, 80s, and 90s themselves, and sadly for them, are no longer on the lips of the saints. But a new crop — in its sexy 30s, 40s, and 50s — is there to take their place, writing the books, shaking their mighty fists at the camera, and granting interviews to Fox News and Oprah. Their wives are coiffed and slender, beautifully dressed and appropriately submissive in First Lady style.

When the Great Christians give their opinion on gay marriage, people listen, nod their heads, and say, “Yes, yes, that’s it. Prophet Pulpit Pummeler says so.” When they tell acolytes to boycott a store, the believers do. When they meet with ecumenical leaders to discuss a global religion, some followers wring their hands, wondering, “Why does Pastor Protector do this? Doesn’t he know that Catholics and Evangelical Protestants differ on fundamental issues? and that Jewish people and Christians differ on a REALLY major issue? How can all people believe one thing, and what will that one thing be?”

Good questions, but unfortunately, the followers of celebrity Christians do not have enough confidence to seek wisdom, considering themselves spiritually unqualified to process through the tough, tough issues facing people who live in the globalized, mass-media dictated, corporately controlled world of the 21st century. The best they can do is listen to the voices of the Voices, and adjust their belief system accordingly.

(It’s not so strange, really, given that millions of Christians are trained, multiple times a week, to sit in a chair and passively listen to the person pacing the dais in front and above them.)

But this is not what we are called to do, or be, anymore than our diet consists of snatching spoonfuls of ice-cream over the kitchen sink. The world is filled, and has always been filled, with complex issues — complex because they involve people — and no pithy saying, Tweet, or meme from any Big Name is going to solve the problems, or do the thinking, for us.

We need wisdom, and wisdom — unlike money, power, celebrity status, and fame — is not held out of reach from ordinary people. It is there for the asking.

If we will only ask.

Thank you for joining me at Commonsense Christianity, where, despite not being interested in the voices of self-imposed chieftains, I find myself being assaulted by their pronouncements. I can’t imagine what the white noise is like in the heads of those who actually seek out, follow, and learn from these people. 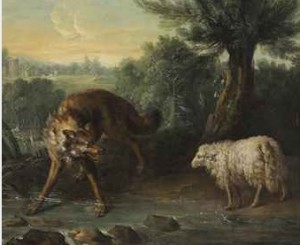 “Many false prophets will appear and deceive many people.” (Matthew 24:11) Recently I ran across a blog from a mega-pastor who was refuting the teachings of another mega-pastor. Mega-Pastor B had some decent things to say about grace, mercy, acceptance, and Christ’s love that millions of Christians have not yet grasped, but quite unfortunately wove […]