What Chickens Teach Us about God

There are two primary ways to learn about God:

The first, and most obvious to all of us (even though we may not take advantage of the resource), is Scripture itself. Old Testament, New Testament, Psalms, Gospels, Epistles, History, or Poetry — the Bible is full of references about God, and when we read it on a regular basis, with an open mind and a strong dependence upon God Himself to teach, we absorb the love, the grace, the wisdom, the power, and the awesomeness of our Father.

The second, less obvious, but no less important means of learning about God is through His creation:

“For since the creation of the world God’s invisible qualities — his eternal power and divine nature — have been clearly seen being understood from what has been made, so that men are without excuse.” (Romans 1:29)

Simply walking outside is a lesson about God, only our problem, in a society that is increasingly trapped within cities and spends its day going from car to cubicle, from cubicle to grocery store, from grocery store to interior living space, all with a radio, iPod or TV droning music or talk show or newscaster in the background, is that sometimes it’s difficult to notice God’s creation, so eclipsed is it by man’s messiness.

When Jesus walked the earth, people on the whole were less insulated from God’s creation, given that New York City and its clones weren’t the societal norm, and nobody had cell phones. Many of our wise Eldest Brother’s stories and statements had to do with sheep, or vineyards, or walking from one town to the next, or fishing, or even my favorite, chickens.

Now those of you not privileged to have chickens in your life — living ones, that aren’t breaded or fried — don’t know what you’re missing. “Pecking order” is a real and violent thing, and within a flock, there are definitely the top birds, the lowest of the low, and everyone in between. In a chicken coop, if you have multiple bars on which the birds may roost, the dominant birds are at the top, prime real estate where everyone wants to be, because if a predator does get in, it will go for the birds on the lowest level. For this reason, there’s a lot of pushing and jostling and moving about on one’s roost, to secure the best spot.

It reminds me of a classroom, or office environment. And speaking of offices and upper level management, roosters crow a lot, frequently for no reason.

“O Jerusalem, Jerusalem, you who kill the prophets and stone those sent to you, how often I have longed to gather your children together, as a hen gathers her chickens under her wings, but you were not willing!”

Quite honestly, most of the time chickens seem like pretty mundane, primeval creatures (which they are, and they aren’t), and left to free range, they patrol an area regularly for worms, grubs, and grass. But a mother hen is something different indeed, easy to identify from a distance even when you can’t see the chicks near her feet:

She stands straighter. She’s alert, constantly looking for danger. And when she senses that danger, she emits a special clucking noise that brings the chicks — the smart ones that wind up surviving, that is — to her at a run. They gather under her outspread wings, which she then enfolds around the chicks, sheltering them from the threat.

Most dogs and cats take this as a strong indication to keep their distance, and even wild creatures think twice about approaching a puffed out, inflated, extremely belligerent creature. And while the chicken is not generally thought of as a noble animal — like a lion, a tiger, or even a polar bear, all of whom don’t take kindly to strangers messing with their children — the mother hen is noble in her own right, and she will give her life to protect her brood.

“I will take refuge in the shadow of your wings until the disaster has passed.”

As I mentioned before, the chicks that survive are the ones that listen for and heed that special clucking of the hen; those that run off into the grass, panicking, generally find themselves in the jaws of a predator.

“He will cover you with his feathers, and under his wings you will find refuge,” Psalm 91:4 describes our creator, our God, our Father as a bird — a mother bird no less — because in this creature that He made He infused a sense of protection, and fury against the enemy, and willingness to fight to protect what is hers.

We Are God’s Precious Children

This is God’s attitude toward us, His precious children, and He wants us to stay close, near Him so that when He calls we can drop what we’re doing and run to His protection, because we mean so much to Him. The mother hen does not stop her chicks just before they reach her wings, asking whether they were thinking right thoughts a minute ago, or whether or not they ascribe to correct doctrine — all that matters to her (and to them) is that they come when she calls, and rely upon her to be safe.

Such is the lesson that we can learn about God, from chickens:

We are precious to Him, and we need His protection, because there are a lot of predators out there ready to eat us up and spit us out. Rather than keep our distance, because we obsess, constantly, that God is displeased with who we are (His children!), let us stay well within His circle of protection, learning from Him how to uncover the food we need, where to find water, where to safely sleep.

And let us listen, always, for His voice, because it is one of love and care, compassion and mercy, and it calls us to His side.

Thank you for joining me at Commonsense Christianity where I encourage you to seek God, always, with this fact in mind:

He is all good. All loving, All compassionate. All merciful.

If any doctrine or teaching calls this into question, then change the doctrine, not your idea of God. The latter is what we find happening throughout our contemporary 21st century establishment Christianity, leading many of us to fear God in a manner that involves suspicion, not awe.

You Don’t Belong to Any Church: You Belong to God

Do You Long for the Love Christianity Promises? 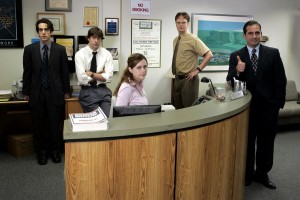 Corporate Christianity: 5 Ways to Stop Thinking Like Office Workers
archives most recent
More from Beliefnet and our partners
previous posts