I don’t tend to keep up on “Christian News,” because it pretty much looks like the standard misinformation and disinformation that the rest of the media world puts forth, only with the words “Jesus” and “God” thrown in enough to make it spiritually acceptable.

Because I now incorporate a blog at the Christian Post, however, I can’t help but see the headlines, and the latest, most breaking news in the Church and Ministry section announced,

In case you don’t know who John Piper is (I didn’t, until a month or so ago when I was wandering around the Internet looking up disparate things), he is a Calvinistic Baptist preacher who served as Pastor for Preaching and Vision (what an interesting job title) at Bethlehem Baptist Church in Minneapolis for 33 years.

He writes lots of books and tends to be quoted in Christian media when he speaks, as he was in this article.

Now the purport of the story is pretty much encapsulated in the headline, and Piper describes bullying pastors as domineering leaders who are bad shepherds who don’t love the flock, and thereby can be “approached” by actual members, male or female and not just approved leadership. That’s a nice concession that one doesn’t normally see.

You’re Not My Dad

My favorite part of the story is this one:

“Piper also acknowledged that not all bullying complaints are legit. Some people, he said, have an over sensitivity to healthy pastoring. ‘Someone might accuse a pastor wrongly of bullying just because they don’t like his tone of voice or he seems to be a little bit more firm than they grew up experiencing by their dad,’ said Piper.”

I don’t know about you, but as a fully grown adult, of the age now that I could very well be older than many pastors I might encounter, I am appalled by the concept that someone could even dream of inserting himself into my, and my family’s life, like a dad.

Just what, exactly, is “healthy pastoring”? Is it psychological counseling? Marriage advice? Parenting instruction? Lifestyle guidance? Career suggestions? Just how far does shepherding, by a human being others have chosen to put themselves under, go?

Apparently pretty far, if bullying is an issue not immediately resolved by the person being attacked standing up and saying,

“That’s uncalled for, and you have stepped out of line. I expect an apology, now.”

Leadership, authority, hierarchy, accountability, and submission are hot topics in Christian, especially evangelical, circles, and while the 21st century interpretation of the paid position of pastor (of Preaching and Vision, or otherwise) isn’t specifically found and described in the Bible, those in positions of church authority like to quote Hebrews 13:17 as a means of keeping the sheep in line:

“Obey your leaders and submit to their authority. They keep watch over you as men who must give an account. Obey them so that their work will be a joy, not a burden, for that would be of no advantage to you.”

Interestingly, this verb “obey,” cross-referenced in Strong’s Concordance, is in other verses translated as “trust in,” or “have confidence in,” which is a strong distinction from “obey,” and even if one chooses to do the latter, it would be best not to do so until the former two options have been achieved.

Quite frankly, the primary Shepherd in a Christian’s life is Jesus, the only Father we fully submit to is God, and our one, true,  good Shepherd “lays down his life for the sheep.

“The hired hand is not the shepherd who owns the sheep. So when he sees the wolf coming, he abandons the sheep and runs away. Then the wolf attacks the flock and scatters it.” (John 10:11-12)

There are many good pastors out there who study God’s word with a sincere desire to grasp truth from it, and pass it on to their fellow believers — with whom they are equal in the sight of Christ. Many of these men and women work hard and diligently, mirror the humility that Christ showed when He washed His disciples’ feet, and are little rewarded (materially) for their pains.

There are others, however, who do not “enter the sheep pen by the gate, but climb in by some other way.” (John 10:1)

These are thieves and robbers. “The man who enters by the gate is the shepherd of his sheep. The watchman opens the gate for him and the sheep listen to his voice.”

Before we listen too seriously, too well, and too obediently to another person’s voice, we might want to ask ourselves why we’re doing this, as well as remind ourselves that, in a church situation, choosing to attend any particular congregation is a completely voluntary process, unlike the submission demanded by government, employers, rulers, and kings.

Some Submission is a Choice — Make It Wisely, If at All

Many of these latter are foisted upon us without our consent and desire — and if we get nothing more out of the controversial Romans 13:1-7  (“Everyone must submit himself to the (governing) authorities”), it’s that we give Caesar or our middle manager what he demands, and hope that he lets us alone. We don’t have to fawn all over him.

And yet this is what we are expected to do within a church hierarchical system, and that there is even an issue of bullying church leadership is a very bad symptom that the sheep are listening to the wrong voices, because, as Piper says in the article, “These bad shepherds may abuse their positions because of an ego trip, a need for control, a love of finacial (sic) gain or a desire to inflict harm on others.”

If the sheep are being wise and discerning, and if we take seriously 1 Peter 2:9:

“But you are a chosen people, a royal priesthood, a holy nation, a people belonging to God,”

we will not put human religious kings over the hearts and minds and spirits and souls that belong, solely, to God.

Thank you for joining me at Commonsense Christianity, where I consistently and constantly encourage all Christians, regardless of what they do on Sunday morning (or Saturday, if that’s your bent), to read the Bible diligently and often for themselves, and to know what the truth is without needing someone else to interpret it for you.

The Misfit Christian (this is what you will find yourself being when you stand up for yourself, ask questions, and disagree with the general flow of things) 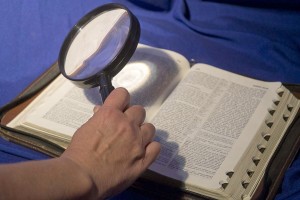 Questioning Convention: It's Part of Growth
archives most recent
More from Beliefnet and our partners
previous posts