You know, for a society absolutely saturated in violence, sexuality, and offensive language, we’re remarkably oversensitive  at the oddest times, and statements that were a joke ten years ago approach secular blasphemy today.

Specifically, I’m thinking of the no-win question, “Do you still beat your dog?”

On a witness stand, with a clever lawyer, you would be forced into answering yes, or no:

“No, I haven’t stopped beating my dog,”  or “Yes, I stopped beating my dog,” with, “I have never beat my dog” impermissible as an answer. Either way you look at it, you beat dogs, even if you don’t own one. This is what’s known as a lose-lose scenario, a term that hasn’t made it into popular seminar speak because it’s not positive, dynamic, or passionately intentional.

I was reminded of this when I fielded comments from a recent article I wrote, Do Christians Use the F-Word? in which I explored the concept of whether or not Christians swear, and if so, at what level (Shuckydarn? BlamNammit? Pluck it all?)

Predictably, I was vilified and blessed, my harshest critic being an atheist whose ministry is to instruct Christians on how they should live. Several people wrote me privately to express gratitude, because whether we want to say it out loud, both Christians and non-Christians swear, and shaking fingers and saying that we shouldn’t isn’t enough to make it go away. (You really should cut French Fries out of your life, you know; if you truly cared about your health, you would. And you need to start exercising.)

But the major argument was the one I expected, along the lines of beating the dog, and it goes like this:

Apparently the Holy Spirit has no problem with malicious talk, slander, gossip, deceptive speech, or leaving out pertinent facts —

all of which can be accomplished without a single vulgarity, and when I pointed this out to one commenter, he doggedly repeated,

“If you have the Holy Spirit in your life, you won’t swear.” (In other words, you are either still beating the dog, or you have stopped; either way, you lose.)

Are You a True Christian?

Okay, so let’s forget the subtler speech that causes more damage than sailor talk, and replace a sin, any sin, in the above sentence for “swear,” and see what we get:

“A true Christian can’t steal/lie/cheat on taxes/break the speed limit/take the bigger piece/pretend he’s not home to take the call/have uncharitable thoughts about his boss/feel resentful/get impatient/ be jealous of his brother’s new car. If he does, that’s evidence that the Holy Spirit does not work in his life.”

You’ll notice that I avoided the biggies — you know, murder and adultery, but I did manage to get in coveting, lying, and stealing, all of which made it into the Top 10, because while crafting a homicide tends to be something most Christians, or people in general, avoid doing in a day, not one of us gets through 24-hours without messing up somehow.

So does that mean we’re not Christian? Does being a Christian mean that we never, ever sin?

While sinless perfection is a nice goal to shoot for, and while the Christian life realistically should be accompanied by some improvement of lifestyle, thinking that we can actually be sinless — and most certainly expecting others to be so — is not what Christianity is all about.

Grace is what Christianity is all about.

We mess up. Constantly. Consistently. On a moment by moment basis. We may do really well for an hour or so, and just as we’re tempted to bask in our “spirituality,” the idiot in front of us on the highway cuts us off, and the first thought in our mind is not, “God Bless Him.”

Yes, avoiding sin is a good goal, but denying that it exists in our lives is a losing proposition. Every time we sin, every time we mess up, is a good opportunity to come before the Master and say, “I’m not perfect; You are. Remind me of this when I demand perfection in others.” 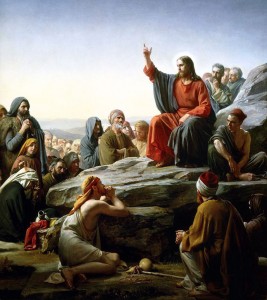