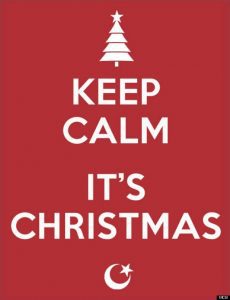 Today is the day all believers honor the birth of the prophet, Isa AS, son of Mariam, whose virgin birth is narrated in the Qur’an (19:17-21).

There truly is a need to put Christ back in Christmas, by acting on the values of charity and forgiveness that the Prophet Isa AS embodied. His message, like tat of all the Prophets, was for all of mankind, so as a Muslim it is my duty to not just say “Merry Christmas” but to also live it. Of course, I will fail, but that’s where the forgiveness comes in.

Neither the War on Christmas nor the War on Mawlid – waged by puritans of both Christian and Muslim extractions – should taint the beautiful and universal tradition of goodwill that the Christmas season evokes. This is the time when bonds of family and friendship and neighbors and community are forged stronger. There is strength in Christmas that we should honor.

Personally, I plan to honor it today by going to Harry Potter World with my family 🙂 Of course, I will say As-Salaam Aleykum upon Santa if I see him there. (It really does explain everything)

read next post
Islamism, Salafism, Jihadism, and the GrayZone
archives most recent
More from Beliefnet and our partners
previous posts