the solution to the unschooled scholar problem – the Islamic dojo 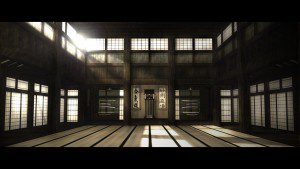 I’m going to throw out some quick half-formed ideas in response to this article by Sufi Synik (via the indomitable Samar Kaukab):

Half of the Muslims want me to shut up and take every single hadith (without considering its historical context) that they shove down my throat. And if a hadith can’t be found, then they find a quote of one of those ancient scholars. Or a link to a modern scholar’s website or youtube video who is regurgitating what an ancient scholar said. The other half of the Muslims hate scholars. They want women to lead prayer in the front row and they want all-gay mosques. They want to forego every defining feature of Islam and nominate Irshad Manji as Grand Mufti of America. e youth, the converts, the ummah… it has no idea what it wants or where it’s going. It has no leadership. No answers. Just mass confusion, shouting matches, and endless social media debates. Personal opinions (which include our own unique list of “correct” scholars) take the place of God. We relish and cherish these opinions. We force our new “god” down everyone’s throat. Our newer coreligionists ask questions and get ten thousand different answers. We don’t care. We still fire off the opinions of our respected (ahem… our OVERLY respected) scholars. We become fanatical for this sect or that, because *these* scholars are rightly guided. -Or we become fanatical in a more violent form. Or we throw it all out and just worship western liberalism. Because we are lost. Hurting. Intellectually exhausted and perplexed. And all because we took those ahadith about respecting scholars a little too literally… and a little too far…

I think “scholars” are a relic of the pre-information age ummah (and i use the term ummah in a taxonomic sense only). The system was never intended to function in this distributed way. The better analogy woudl be martial arts (of which i know nothing, mind you) – you dont go off and start learning by creating your own technique or by saladbar approach from other styles. You pick a style, you pick a specific dojo, and you learn and train from a master (ie, your imam) and you immerse yourself in a tradition. In this analogy, fiqh is analogous to specific forms and motions. When issues of fiqh arise, its the dojo that forms consensus and then members of the dojo submit themselves to that consensus – or in case of dispute, the ruling of the Master (imam). The religion is called Islam – submit! but there is still room for choice – the dojo is not a prison, and you have every right to leave. Likewise the dojo has every right to bar you. This isnt a sectarian vision, mind you.

Who starts a dojo? The answer will depend on sectarian preferences. But when faced with a hadith-thrower in an argument the response needs to be a challenge on their dojo rather than meeting them hadith for hadith. We need to delegitimize personal opinions on fiqh while providing outlet for personal choice on fiqh. A dojo neednt be a full institution like Zaytuna or a whole school of jurisprudence but can be as local as your local elementary school. We need to foster the infrastructure for creating these localized communities of faith.

The mosque is not a synonym for dojo, either. A mosque might represent the common ground of multiple dojos. A dojo might be large enough to encompass multiple mosques. If dojos are the soul, the the mosque is the body; one is warp and the other is weft.

Who leads a dojo? ask teh same question of a dojo, or a boy scout troop, or a nonprofit org. A dojo should exist to express a difference. That difference needs to attract like minds and have scholarly support, to be viable. Scholars have a role here to advise and ensure that the dojo doesn’t stray in matters of basic deen. There will be constraints on a dojo’s freedom of fiqh, based on its position within the sectarian divide, the classical school of jurisprudence, the cultural and ethnic makeup of its members (founder, especially), and its members’ histories. A dojo founded by an African American Muslim professional in Hyde Park will have very different fiqh priorities than one founded by a South Indian entrepreneur in Phoenix, just as a church in Compton will have a different social and spiritual agenda than one in Calabasas.

The information age allows anyone to access everything. We are all scholars now. That is dangerous and requires us to find our way back to the essence of faith: submit.

Shari'a tectonics; Eurabia is still a lie
archives most recent
More from Beliefnet and our partners
previous posts