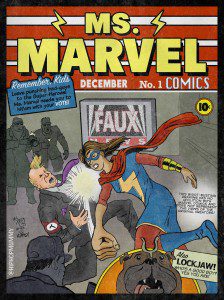 It needs to be said – that Trump is a symptom, not a disease. There has been a GOP War on Muslims for years, and despite heroic efforts by Republican Muslim Americans to sway opinion, the bottom line is that Muslim hatred is a prerequisite for the GOP nomination.

Just as incendiary rhetoric by radical Imams in mosques can have direct consequences, or virulent pro-life extremism by right-wing talk show hosts, so too does mainstreamed Islamophobia. The radicalization of Republicans about Islam can be quantified:

Why is the GOP establishment panicking about Trump? It’s not because Trump is poisoning the GOP message by importing hate. It’s because Trump is tearing back the curtain on the hate that is already there. And everyone running for the GOP nomination knows it, and panders to it. They just don’t have the stones that Trump does to court it openly.

“The fact is we need appropriate vetting, and I don’t think orphans under five should be admitted into the United States at this point.” — Chris Christie, regarding Syrian refugees

“Where is there widespread evidence that we have a problem in America with discrimination against Muslims?” — Marco Rubio, denying Islamophobia exists

“I mean, you can prove you’re a Christian. You can’t prove it, then you know, you err on the side of caution.” — Jeb Bush, on religious testing of Syrian refugees

“If there’s a rabid dog running around your neighborhood, you’re probably not going to assume something good about that dog.” — Ben Carson, about admitting Syrian refugees

“We will carpet bomb them into oblivion. I don’t know if sand can glow in the dark, but we’re going to find out.” — Ted Cruz, on how he would defeat ISIS

“I don’t think we’re being careful enough with who we let in.” — Rand Paul, on immigration from Muslim countries to the US