Will George Clooney convert to Islam?

Along with the entire nation of Pakistan, I’m fascinated by this story: 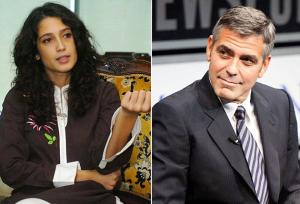 He is Hollywood’s most eligible bachelor. She is an outspoken poet
and journalist born into Pakistan’s greatest political dynasty. What,
then, could spark a bigger media circus than a “secret romance” between
George Clooney and Benazir Bhutto’s 26-year-old niece, Fatima?

Newspapers
across the subcontinent were thrown into frenzied excitement yesterday
when America’s most influential supermarket tabloid claimed that
Clooney had embarked on a long-distance relationship with Ms Bhutto
after meeting her at an international conference last year.

The
National Enquirer alleged that the 47-year-old actor and political
activist was privately smitten by the “brainy foreign beauty,” who
lives with her brother and step-mother in a prosperous suburb of
Karachi.

Assuming that it’s true (which given the origin of the story in the National Enquirer, does require at least some skepticism), it’s notable that Clooney’s interest is partly because of the “foreign” aspect. Also, we can assume that the “brainy” appeal is largely due to the contrast with his usual coterie. I’m surprised the phrase “exotic beauty” haven’t been used yet. But Fatima Bhutto’s cachet as scion of the most powerful political dynasty in Pakistan also surely is part of the appeal.

As a distraction from other (ahem) world affairs of greater significance – such as finally admitting that the Mumbai attackers did have Pakistani links – the Clooney-Bhutto romance certainly is useful. But let’s suppose it is true and Clooney is serious. How serious is he? Would he be willing to convert to Islam to gain Bhutto’s favor? To be honest, after Mikael Jackson I’m kind of dreading the media circus. But Clooney’s been fascinated with the Islamic world for a while now – Three Kings and Syriana come immediately to mind. As a muslim Clooney could film his next movie in Mecca proper… and not even have to give up his Starbucks or Burger King.