Hedieh Mirahmadi is a former Muslim who converted to Christianity. Formerly working in national security, she honed her expertise on Islam and religious extremism for working in Afghanistan and Middle Eastern affairs. A powerful encounter with the Lord redeemed her life and gave her a strong passion for sharing the Gospel of Jesus Christ. Her full-time occupation is now working with ‘Resurrect Ministry,’ an online resource that utilizes the power of virtual social platforms to lead others to Christ.

In a recent podcast interview, Hedieh shared her story of how her faith transformed her entire life. Mirahmadi was a devoted Muslim for over two decades. She explains what led her to convert to Christianity, “Ultimately it was the inability to experience fulfillment in Islam. I was proud of doing things well. When I was a Muslim, I did it with the same dedication to perfection that I did within life. I prayed on time. I kept ritual washing. I wore traditional clothing. I ate Halal meat, a certain kind of meat that very conservative Muslims would eat.”

Despite following all the rules and traditions of that religion, Hedieh felt that a crucial part was missing, “No matter who I spoke to, and clerics, scholars, I had access to some of the most brilliant minds in Islam. [I would ask] ‘How do you know you’re saved?’ Nobody could tell you that Mohammed promises salvation because he didn’t. I lived with this looming over my head that I had no idea what he was going to forgive me for if anything.”

After much reflection, she decided that she didn’t see the point of continuing to practice her Muslim faith, “I was at FBI headquarters, and I decided to take my headcover off. I just had to leave Islam. I felt that I spent enough time trying to please a god that I had no relationship with, that didn’t speak to me, and that I didn’t even know whether he loved me or not.”

After moving back to southern California and experiencing many life difficulties, Mirahmadi came across a tweet of a Pastor preaching about everything that God can do for our lives. Mirahmadi emphasized the miracle of her coming across that tweet because she didn’t follow any Christian Twitter pages, nor did she have any Christian friends at the time. The former Muslim started to binge-watch all the videos, and as she learned more, she began to pray that God would reveal Himself to her. Mirahmadi shared her audible experience of God’s voice in her bedroom, telling her that He was right there with her. That moment changed her life forever, and she accepted Jesus as her Lord and Savior.

Once she had the Holy Spirit in her, she felt the urge to help others come to Jesus as she did. One of her current priorities is leading Afghan refugees to Jesus. Although she disagrees with how the U.S. handled the evacuation procedures, Mirahmadi sees the recent events as an opportunity to grow God’s Kingdom. The ex-Muslim explained that the new immigrants have been ripped from their homes because of the Taliban and their corrupt religious doctrines. Giving them the chance to hear about God’s everlasting love and the gift of salvation is what they need to hear right now in their time of need. She described the events as a “divine opening to bring glory out of tragedy and turn a diplomatic failure into a victory for the Kingdom.”

Mirahmadi ended the podcast with a powerful concluding statement of “The world just needs more Jesus.” 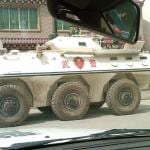