In the past, Billy Graham referred to Pastor Greg Laurie as a “personal friend and one of the great communicators of the gospel of Jesus Christ in our generation.” For Laurie, the feeling was mutual.

Throughout the years, Laurie has acknowledged Graham for his discipleship, his leadership and his humility. Laurie also recognized him as a remarkable friend.

In Laurie’s new book “Billy Graham: The Man I Knew,” he gives readers an insider’s view of the world’s best-known evangelist who was loved and admired by millions. For Laurie, the book is deeply personal.  In an exclusive interview with Beliefnet, Laurie opened up about his friendship with Graham that spanned more than two decades, a relationship that transformed his life.

Many people may be surprised to learn that Graham was a very down-to-earth, friendly, genuinely approachable man.

Laurie recalls a time he went with Graham to a Red Lobster for lunch. There was an atheist convention going on in the same community where he was holding a crusade at the same time.

“We’re sitting there eating and Billy had a ball cap pulled down over his hair. I think he thought maybe it would disguise him, but it didn’t do that great of a job because he had such a famous profile,” Laurie said.

People started coming up to Graham, asking him for his autograph, saying hello to him. Some of them were wearing badges for the atheist convention. What Laurie was most amazed by was Graham’s grace in that moment. He took time for each one, Laurie said.

“We know that [Graham] was a counselor to presidents. We know that he influenced world leaders. But he also had time for regular people,” Laurie said. “Sometimes when you sit down with someone who’s famous, they want to talk about themselves, but Billy was actually the opposite. He always wanted to talk about whoever he was with.”

Laurie also recalls a time when he introduced a friend to Graham who really wanted to meet him.

“My friend said, ‘Billy, thank you for all that you’ve done and your faithfulness to the Lord all these years,’ and Billy said, ‘I wish I could have done more.’”

Laurie’s first thought was, how could he have done more when he had done so much with his life. Yet, Graham always recognized that there was more to do.

Several qualities made Graham not only a great disciple, but also a great friend.

“He took his message seriously but didn’t take himself too seriously,” Laurie said.

He recalls being in awe of Graham when he first met him. Laurie called him ‘Dr. Graham,’ but he was quick to correct him. “Don’t call me Dr. Graham, call me Billy,” Graham said. It took him a while to get used to calling him. Billy.

Graham would often say, ‘I’m just a country preacher.’ That wasn’t the humility, that’s really who Graham was, Laurie said.

Graham was the son of a dairy farmer and as a young boy, he aspired to be a pro-baseball player. He never dreamed of becoming an orator, a preacher, but this was a call that God put on his life, Laurie said.

“He had a great passion for the Gospel and never really wavered from that from the beginning to the end of his ministry,” Laurie said.

“Perhaps he mellowed with age, somewhat, and slowed down a bit in his cadence, but the fire in his heart never stopped burning. It burned brightly until the end and his message of the gospel was always front and center.”

In this day when many leaders have fallen to scandal, it’s great to know that a man committed his life to Christ and made it to the end, faithful to the Lord without any scandals, Laurie said.

“Billy would often say [Ruth] was the real theologian of the family and that was actually true,” Laurie said. “She was a real student of scripture. She would counsel Billy and tell him what she really thought about things.”

There wouldn’t be a Billy Graham as we knew him without Ruth Graham, Laurie said.

The book is the story of the two most godly people I ever met. Laurie spent time in their home and in other casual settings. He was privileged enough to sit with their family and be thought of as a friend. They were the real deal, he said.

“[In the book] I wanted to share, who are these people because they impacted the world,” Laurie said.

I think there are many things we can learn from them.”

This is the closest book Laurie’s written to a book on leadership. There are so many lessons we can learn about leadership directly from Graham’s life.

“I think that these are great principles that we can all learn from as we are leaders somewhere, influencing people.” 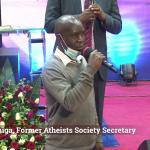 ‘I’m So Happy to Be Here’: Atheist Society Official Resigns Position, Becomes a Christian
archives most recent
Get the Christ News Today Bible Verses email newsletterpowered by ArcaMax
More from Beliefnet and our partners
previous posts