A super blood moon that will be visible tomorrow has triggered claims that the end times are near, and there may be proof.

A lunar eclipse, also known as a blood moon, will be visible across the world, all the way from Australia to America and the Pacific Ocean, Daily Star reports.

The moon turning blood red is a heavenly sign that the end times are near, according to CBN.

Claims that a blood moon is a sign of the end times originates in the book of Joel. In this book, it is written, “the sun will turn into darkness, and the moon into blood, before the great and terrible day of the Lord comes” (Joel 2:31).

Many end times theorists claim that the end is near and that numerous signs point to it. Steve Warren and Benjamin Gill of the American conservative evangelic Christian television network said, “Jesus told His followers that we should observe the signs of the times, including signs in the heavens.”

“Some preachers claim the large number of Blood Moon eclipses in recent years are just one of many signs that the end of the world is drawing closer and could happen in the near future,” they added.

There will be areas around the world, including Canada and Russ will be able to see a rate “ring of fire” solar eclipse that will also last three minutes and 33 seconds.

End times theorists claims that this sign points to quote in the book of Luke, “There will be signs in sun and moon and stars… for the powers of the heavens will be shaken.”

You can find the exact schedule of the blood moon in your area here.

Do you believe tomorrow’s blood moon is a sign of the end times? 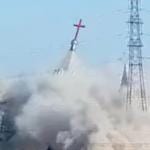