Long Hollow Baptist Church in Hendersonville, Tennessee, had seen its lowest attendance following a spike in COVID-19 infections in the area. Robby Gallaty, the church’s senior pastor, felt that things worked against what he thought God was instructing him to do, FaithWire reports.

“It was like all the water we could put on the offering,” Gallaty said, referencing the Old Testament story in 1 Kings 18. This was when Elijah poured water on a sacrifice during a drought so that when it was consumed by fire, it was apparent it was only God’s doing.

Then in mid-December, 99 people were baptized.

“I’d never seen anything like this before in my life,” Gallaty told FaithWire. He felt like it was the end of the “revival” he was seeking. Later that night, the Lord gave him a visual when he was sitting outside his home.

“These are the heavy raindrops, Robby, before the torrential downpour that’s coming,’” he said.

Gallaty reached out to other ministry leaders at the church, and the following Tuesday, the church hosted a baptism-only service. Another 81 people came.

Following this service, Gallaty said things “got really out of control.” People who were watching the online service began to travel to the church and the satellite campuses, and the numbers kept growing.

In less than four months, the church has baptized more than 1,000 people from 15 different states. Some people ventured as far as Maine, though Gallaty expressed he “never encouraged” anyone to board a plane to Tennessee.

Those who traveled there for baptism were encouraged to plug into community groups at their church or seek discipleship in their hometowns.

What a beautiful example of the Holy Spirit working through this congregation!

Watch Gallaty’s interview with FaithWire in the video below. 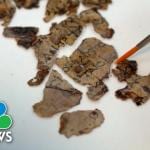