Pastor Greg Laurie, the senior pastor of Harvest Christian Fellowship in California, addressed those who are concerned the COVID-19 vaccine might be “the mark of the beast.”

Laurie did his best to put any spiritual concerns his congregants had to rest with a recent sermon on the book of Revelation. He also shared the message again in a video clip shared on Twitter, explaining why he is confident the vaccine isn’t “the mark of the beast.”

“Also it causes all, both small and great, both rich and poor, both free and slave, to be marked on the right hand or the forehead, so that no one can buy or sell unless he has the mark, that is, the name of the beast or the number of its name. This calls for wisdom: let the one who has understanding calculate the number of the beast for it is the number of a man, and his number is 666.”

“When people take the actual mark of the beast, which, of course, is 666, they will know they’re taking it, because you will have to pledge allegiance to the antichrist,” Laurie said. “So there can’t be a mark without an antichrist. And the antichrist cannot be revealed until Jesus Christ returns for His church and catches us up to heaven.”

Laurie predicts the mark will be very popular. All the celebrities will talk about it on social media, he said.

“I got the mark. What about you? Come on. It’s cool. Do it,” Laurie said. He cautions that we are not there yet and shouldn’t be in fear around this.

“So don’t spend your time worrying about if you’ve taken the mark or who is the antichrist is. It’s not revealed yet. Focus on Jesus Christ and following Him.”

Laurie also said that it doesn’t make sense to figure out what the mark of the beast and will be.

“The mark of the beast is future, not past or even present – yet,” Laurie said. “The mark is a visible, literal brand of sorts. The mark will be given as a sign of devotion to the antichrist and as a passport to commerce. And here’s the thing: you’ll know it when you’re getting it.”
You can watch Laurie’s full sermon in the video below. 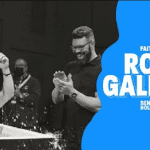