Archaeologists excavating the site of the biblical miracle where Jesus fed the 5,000 were halted in their tracks by a freak flood during a search for secrets, the Daily Star reports.

The site, known as the village of Bethsaida, is now totally submerged by the sea of Galilee, also known as Lake Kinneret, forcing experts to abandon the site.

The location was lost for centuries. Yet, archaeologists have been working hard to prove that the ancient town once stood at El-Araj, an excavation site on the northern shore of the Sea of Galilee.

Bethsaida was also the hometown of disciples Peter, Andrew and Philip.

As a result of the flooding, lead archaeologist professor Moti Aviam of Kinneret College said there is no way digging could continue this year.

“During the past 30 years, the amount of the rain in Israel was not enough to bring the lake to its full capacity,” he said.

“This year, it happened. All of our excavated squares, even the highest – the mosaic floor of the Byzantine church – were covered.

“The entire site is covered today with a large lagoon in which catfish are swimming.”

He then went on to say, “We think that nothing will happen to the antiquities below the water and the water level will reduce slowly, but we will not be able to dig this year.

“All the excavated squares are full of water, so we can’t dig.”

“Even if the level of the water drops 80cm, we will still have to walk and work in mud. It is impossible.”

Even Aviam was blown away by the amount of floodwater.

“I was thinking about the fact it would be flooded,” he said, “but when I came to see it with my own eyes I was astonished…Especially when I got the photos from the drone.”

The only miracle we see repeated in all four Gospels is the feeding of 5,000 – an incredible example of Jesus feeding the hungry. John 6 shares Jesus’ teaching of salvation the day He performed the miracle.

The people had been hungry, so He fed them; however, Jesus teaches that humanity’s greater need is for spiritual food.

Jesus explains, “’ Do not work for food that spoils, but for food that endures to eternal life, which the Son of Man will give you. For on him God the Father has placed his seal of approval.’ Then [the crowd] asked Him, ‘What must we do to do the works God requires?’ Jesus answered, ‘The work of God is this: to believe in the one he has sent.’” (John 6:27-29).

In verse 35, Jesus says that He is the Bread of Life. He points the crowd to Himself, saying that physical food will only satisfy temporarily but salvation through Him is forever. 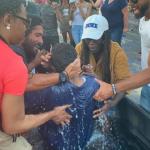 Church Services, Baptisms Being Held at Site of George Floyd's Death
archives most recent
Get the Christ News Today Bible Verses email newsletterpowered by ArcaMax
More from Beliefnet and our partners
previous posts