Over the last two weeks, the world has watched and listened as protests popped up in support of Black Lives Matter. Some of these demonstrations resulted in violence, but we’re also seeing testimonies of faith and love. Lives are being changed at the intersection where George Floyd died while in the custody of police officers on Memorial Day.

Hundreds are gathering at the street corner to proclaim God’s love through worship and baptisms. Joel Bomberger, a preacher with Circuit Riders, was able to capture one of the powerful moments on camera.

“A team of our Circuit Riders went to Minneapolis to hold open-air preaching of Jesus and healing calls at the intersection where George Floyd was killed,” Bomberger reports. “There are too many testimonies to recount!! They were able to preach to thousands and saw hundreds responding to the Gospel of Jesus!!”

Additionally, Bomberger said, “Dozens and dozens of people healed, filled with hope, changed, and born again by the power of Jesus this weekend in Minneapolis!”

Prayer, worship, and baptisms happening on the streets of Minneapolis. #OnlyJesus pic.twitter.com/9OpftoULgY

Other ministries, such as Youth With a Mission (YWAM) are also showing up to hold daily services at the epicenter of the protest. Christophe Ulysse, a leader with YWAM, said they are seeing real change.

“We’re going from pain and hatred to healing and hope,” Ulysse, a Black Christian leader, said. “There’s this new narrative of the gospel.”

“We need to show that we can affect positive change,” Ulysse said. “You have a voice and you can go to the nations. You can carry this on. We’re empowering them to be carriers of hope.”

Ulysse believes we are living in a historic time.

“I came here and I was broken,” Ulysse explained. “It affects team members differently, but those of us of color, as we’re here, we’re watching the change happen through the gospel. My heart is so filled with hope. Those in the neighborhood are saying this is unprecedented unity. They’re feeling an outpouring of love and hope from this nation.”

“For us, there is this deep conviction that we have tried everything to deal w/ this issue. We’ve tried politics, we’ve tried economics, and we’ve tried social reform,” Ulysse, who recalls the Rodney King riots as a kid, said. “It’s the same thing over and over. We have to go back to what actually works.” 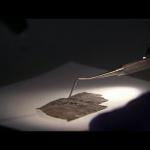