Stephen Colbert and Rev. James Martin Put God Back in the Spotlight

Most Americans struggle to talk about God at all today, much less describe in detail who or what they picture when they think about God. That, however, is exactly what Stephen Colbert and Reverend James Martin attempted to do on the Jesuit-run show “Faith in Focus.” On a recent episode, Colbert proved that, despite being described as “one of the most mouthy Americans on TV,” he was not immune from the difficulties that come with attempting to define God.

“I’m embarrassed by the limitations of my ability to talk [about who or what God is to me,]” Colbert said.

Colbert, however, did not try to use his struggles as a cop-out. Instead, he attempted to put God Himself into words. Colbert explained that God is, to him, something mystical that Colbert tries to shift from the material to the supernatural realm. He said that trying to acknowledge another level of existence and that what humans see is a limited part of a wider world is a longtime practice of his. Part of Colbert’s way of doing that was to play a “strange trick” on himself to see if he could “convince [himself] that the world is different than it is.”

“Let’s say I’m at a cafeteria in college. I’d pick up a piece of broccoli and hold it up, and then I would look at it, and I would suspend my knowledge that if I let go it would go [down],” Colbert said. “[I would see if I could convince myself that] I don’t know which way it would [fall]. That maybe I could convince myself it would go [up or sideways.] And I would let go, and it would fall down, and if I thought it was funny that it went down, I would say ‘I did it!’”

The example may seem a bit strange, but Colbert and Martin used the show to encourage Americans to begin discussing God once more. If it succeeds in doing that, then there are likely to be a great deal more odd stories floating around about how people try to relate to and understand God. If it takes ignoring gravity, contemplating broccoli and Colbert’s inevitable sci-fi and fantasy references to get America talking about God again, hopefully people will brush up on their “Lord of the Rings” trivia and head out to haunt the produce section of the grocery store because it is about time people began discussing faith in public settings once more. 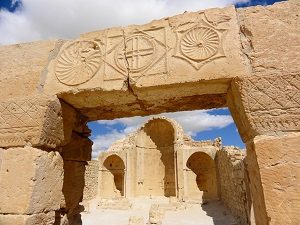 1,500 Year Old Painting of Christ Discovered in Israel
archives most recent
Get the Christ News Today Bible Verses email newsletterpowered by ArcaMax
More from Beliefnet and our partners
previous posts