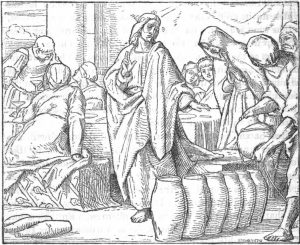 For years archaeologists have searched for and studied the remains of places mentioned in the Bible. One famous place that has continually eluded them, however, is the city of Cana where Jesus Christ performed the first miracle mentioned in the Gospels. In the Gospels, Jesus turned six stone jars of water into the finest wine when He and Mary were at a wedding party in Cana. Unfortunately, the exact location of this city has been lost over the last 2,000 years. Archaeologists believe, however, that they may have finally found this famous city.

Nine miles away from Nazareth is Khirbet Cana, or “the ruins of Cana,” an archaeological site that has been slowly excavated over the last 18 years. The site in lower Galilee contains a Roman-era synagogue, several Jewish ritual baths or miqva’ot, an ostracon incised with Hebrew letters and six Maccabean coins. All of this makes it clear that Khirbet Cana was a Jewish village from 323 B.C. to at least A.D. 324.

Khirbet Cana is not the only archaeological site to claim that it might be the ruins of the biblical city of Cana. Other ancient Jewish towns from the same period also boast evidence that they could be the remains of Cana. The site of Khirbet Cana near Nazareth, however, offers one compelling piece of evidence that is unique and gives it greater claim to the title of ancient Cana. Beneath Khirbet Cana is an extensive network of underground Christian worship tunnels. The walls of these tunnels are marked with crosses and the repeated phrase “Kyrie Iesou” or “Lord Jesus.” The walls also display ancient graffiti containing the names of pilgrims who visited the site long ago.

Within the first cave beneath Khirbet Cana is what archaeologists believe may be an ancient alter inscribed with a Maltese style cross. Above the altar was a shelf with two stone vessels and space for another four vessels of similar size. According to archaeologist Tom McCollough, the presence of six stone jars above an altar suggests that early Christians identified the location with Cana. These Christians would have been from the Byzantine era, so they would not have been potential attendees of the actual wedding at Cana. They would not have been so far removed from the time of the miracle, however, that they would have lost the location of an entire town. The excavation is still ongoing, so there is no definitive proof yet. There may never be undeniable proof that Khirbet Cana is the ruins of biblical Cana, such is simply the nature of archaeology. The evidence is, however, exciting and compelling for both curious scholars and faithful Christians who are delighted to have another confirmed biblical location that they may one day be able to visit.

In Song of Solomon 2:15, the reader is warned to “Take us the foxes, the little foxes, that spoil the vines…” The passage seems out of place for a love poem, but within its context and the understanding of foxes as destructive creatures, the message becomes a warning to the lovers: Beware of anything that […]

A field fire sparked by the U.K. heatwave burned acres of land in the village of Lenham in Kent county but stopped at a giant cross that stands in the center of the field as a memorial for those killed in World War I. The field fire charred much of the ground but stopped at […]