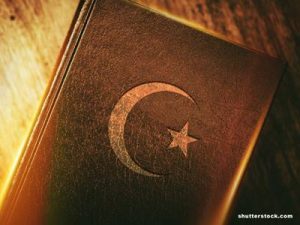 A French scholar has identified the outlines of passages from the Bible behind an eighth-century manuscript of the Qur’an. This discovery is extraordinary as it is “the only recorded palimpsest in which a Christian text has been effaced to make way for the Islamic holy text,” according to The Guardian.

Dr. Eléonore Cellard discovered that there was a faint manuscript of the Bible behind the ancient Qur’an text when she examined an image of the eighth century Qur’an, which was sold by Christie’s Auction House in London 10 years ago. As Cellard more closely examined the image she noticed Coptic letters that appeared faintly behind the Arabic script.

Once Cellard made the discovery, she contacted the auction house where they worked together and made another incredible discovery. They found that the Coptic text was coming from the Old Testament’s Book of Deuteronomy, which is part of the Torah and the Christian Old Testament.

This is a fascinating historical find and an extremely rare find.

“This is a very important discovery for the history of the Qur’an and early Islam. We have here a witness of cultural interactions between different religious communities,” Cellard said, according to The Guardian.

The Coptic writing most likely came around the seventh century, but it’s difficult to determine the precise timeline, Christie’s specialist Romain Pingannaud said.

“Once you know it’s there you can only see it, it becomes so obvious,” Pingannaud said. “We missed it at the beginning. It’s fascinating, particularly because it’s the only example where you have an Arabic text on top of a non-Arabic text. And what’s even more fascinating is it is on top of passages from the Old Testament…it shows the contact between communities in the first centuries of Islam; it’s very relevant.”

According to the auction house, only a handful of Quranic palimpsests have ever been recorded, reported Hawzah News Agency. One example was two leaves from a seventh century Hijazi Qur’an, copied over an earlier text of the Qur’an.

“GQ”: Bible is “Sententious, Foolish and Ill-Intentioned”
archives most recent
More from Beliefnet and our partners
previous posts

When Joseph Kennedy began kneeling on the football field after games to pray, he probably had no idea the decision would land him in the Supreme Court. The former Bremerton, Washington high school assistant football coach had started the practice in 2008. Initially, he went by himself, but eventually, other students, including some on the […]

Things looked bleak for Texas A&M’s pitcher Nathan Dettmer on June 17th, after a tough 13-8 loss to the Oklahoma University Sooners. A college sophomore, Dettmer had started the game and given up 7 runs, getting himself pulled from the game in the second inning. Depressed and in tears, Dettmer found himself in a very […]

Percent of Americans Who Believe in God Reaches New Low

Most U.S. adults believe in God, but the 81 percent who do so is down six percentage points from 2017 and is the lowest in Gallup’s trend. Between 1944 and 2011, more than 90 percent of Americans believed in God. Gallup’s May 2-22 Values and Beliefs poll finds 17 percent of Americans saying they do […]

Cross Still Standing Among Ruins of Church: A Sign from God?

A church in Texas was burned to the ground, but when the rubble cleared, a cross stood tall. Pastor Sonny Smith of the Balsora Baptist Church says the standing cross was a “sign from God.” “To me, that was a sign from God, saying, ‘Don’t worry, I’m still here, and I’m going to lead you […]