My oldest brother is not going to be happy with me for this, as he doesn’t suffer fools or celebrity chefs lightly, but I enjoy watching Gordon Ramsay’s Kitchen Nightmares on FOX.

Augie, Sacramento’s first-ever four-star chef a few years back at Harlow’s Restaurant on J. St, isn’t much for aggrandizement or arrogance in the kitchen.

I can see his point and I am a little surprised at myself for liking Ramsay too, considering his pompous behavior and vulgar language at times.

Ramsay knows his stuff though, and has been humbled to have a few of his own restaurants close, including one in his hometown if I properly recall.

More importantly, Ramsay and his team have helped restaurants stay in business and even grow dramatically in some cases.

“Surviving this recession is a success,” like Ramsay told two brothers who run Boston’s Davide restaurant.

Viewers may be tiring of the over-exposed Ramsay as his show now airs on TV’s graveyard of Friday nights, but he has done some good things and comes across as  big-hearted.

Heck, maybe HE should have been selected as President Obama’s jobs czar for saving and creating jobs in at least one industry.

I, on the other hand, picked a good day to write this blog as it will be a travel day for Augie and he may not see this. 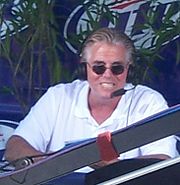 N.Y. Jets' Off The Hook With Media
archives most recent
More from Beliefnet and our partners
previous posts