The Hugging Army: An Exercise in Connection: Book Review 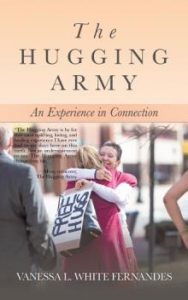 Kindred spirits find each other, no matter how far distant they might be geographically. As it turns out, a sister Free Hugger named Vanessa L. White Fernandes lives a few hours across the state of Pennsylvania from me. We cyber met through the phenom of Facebook and as I read her recent release entitled The Hugging Army: An Experience in Connection, I found myself smiling, nodding, and heart leaping, having lived some of what she did on her road trip adventures that are chronicled in this easy to read tome. It has a comfortable conversational style that enables the reader to follow her along on her 3,000 Hug Bug (she drives a VW Beetle) Tour that she embarked on in 2017. She began in the town of Punxutawney, home of the famous weather prognosticator Phil and ended in Washington. DC at National Pride March. Along the way, in addition to embracing willing folks, she offered a presentation to audiences that shared her experiences and encouraged them to reach out beyond the seeming differences that divide us.

I chuckled when I saw what she called her fellow huggers, those who sometimes join her at her events,  (The Hugging Army) since I refer to my group of folks as Hug Mobsters Armed With Love.

Her journey began when she and her wife  Brenda went to see Amma, known as The Hugging Saint. This is a woman who travels the world and holds marathon gatherings where people wait for hours for a short but powerful embrace and often walk away as if they are glowing. What is remarkable about her is that she seems tireless, sitting for what might seem like humanly impossible hours without getting up to stretch her body or use the bathroom or eat. Inspired, Vanessa wondered what it would be like to follow Amma’s example and hug strangers.

Vanessa began locally and expanded regionally and then nationally. Her initial foray involved standing blindfolded, arms outstretched, awaiting willing huggers, beckoned by her sign that asked if they trusted her enough to hug her. Mutual trust was evident since she needed to stand there, vulnerable. Soon she discovered that people really were willing to trust this stranger, turned heart and soul healer. As someone in the helping professions of therapist and coach, desire for personal interaction came naturally to her. She wondered how her offering would be received. Like me, she found that most would be willing to hug, while some opted out. Vanessa learned to be comfortable with either action. As the story unfolds, she expresses being more at ease hugging people with the blindfold off, as eye contact enhances the experience. Since this is about connection, as the book title indicates, the more we can ‘see into’ others. the greater the intimacy.

The rest of the book has her regaling the reader with tales of interactions with people; some who approached her enthusiastically (one man leaned out the car window), some who saw her sign in her car window and curiously came up to her and asked for hugs. One of the most poignant encounters took place in a restaurant where a man engaged her in a conversation that reflected his religiously justified (in his mind) homophobia. When he left, a fellow diner gave her a note, commending her for being accepting of this man, even though he was disrespecting her.

Lesson 1: Being in the present moment is of the utmost importance.

Lesson 2: Whatever emotion I am experiencing at any given time, I can feel it completely, and nothing bad will occur because of that.

Lesson 3: Vulnerability is the only way to deep, pure love.

Lesson 4: It’s best not to get attached to a preferred or predicted outcome of a situation.

Lesson 5: I have come to an understanding of my sameness with other human beings.

If you do pick up a copy of this book, I encourage you to hug it tightly. I look forward to a time when I meet Vanessa live and in person when we do eventually come together hug to hug and heart to heart. 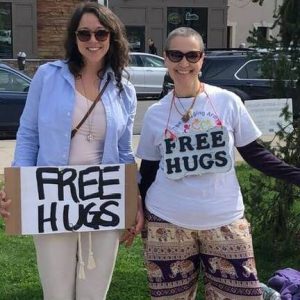 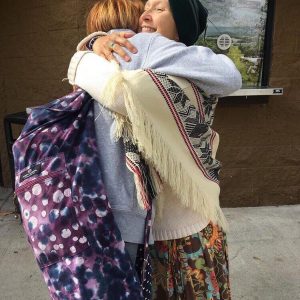