I am writing this after a weekend overflowing with sensory input, such that I am left pondering how my body could take it all in. After completing a full week of work that included counseling clients in a therapy practice, writing articles for the various websites to which I contribute, doing promo work for a client, and gym workouts, I hopped in my Jeep and headed Southward to Virginia. Under normal circumstances, the PA to VA trek takes around 3 1/2 hours and I sometimes find myself nodding off somewhere along the 95 corridor between Delaware and Maryland. This time, I did a pre-emptive end run by asking friends to beam good mojo for me to keep my eyes open. Since my heart attack in 2014, caffeine is forbidden, so I needed to sing my way en route. Arriving before midnight, so I didn’t turn into a pumpkin, I walked into my friend Mitch’s house to be greeted with hugs and cuddles by Mitch and another friend named Beth who had driven several more hours than I, as she lives in Northern New Jersey near the New York border. We chatted a bit and I headed for pillows and blankets, tumbling into dreamland. 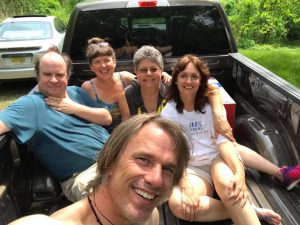 The next morning had us driving another 90 minutes to open Mitch’s cabin for the season. Nestled into nature, his family’s property is called 7 Islands,  and it holds a rustic, high peaked structure that feels like a treehouse as it overlooks a lake and all manner of growing things. The Blue Ridge Mountains are snuggled nearby as well. Gathering cleaning accouterment, a few of us scrubbed floors, windows, bathrooms, refrigerators, counter tops, and walls. Listening to music, we sang and danced along, making the job that much easier. Later in the afternoon, we headed in a pickup truck over to the larger house on the property, situated on a 50-acre lake. Climbing the stairs to the crows’ nest (think tall ship) on the roof of the home, we discovered the sad sight of a tiny baby bird, who had fallen from the nest and crossed The Rainbow Bridge to its next incarnation. Lying nearby was a sibling who was barely breathing while not so comfortably basking in the hot sun. Beth gently scooped it up and tucked it into a washcloth. Mitch contacted a specialized veterinary hospital as I began to offer it Reiki. We got into the car as he drove the 90 minutes to get the bird treated. Along the way, it began to perk up as I spoke to it, encouragingly. It opened its tiny mouth and I was sorry I had no worms to feed it. It then began to serenade us with its insistent chirp. When we arrived and handed it off to one of the vet techs, she told us she thought it was a starling as she assured us that they would take care of this foundling. It seemed that we were all at the right place at the right time. Yesterday I called to discover that there are health care privacy laws for animals too and they couldn’t tell me anything except it was likely that the winged one was taken to a rehab program where it will be nurtured and then introduced back into the wild. Right place, right time, since had we been a few minutes later, it might have joined its brother or sister in a new incarnation. 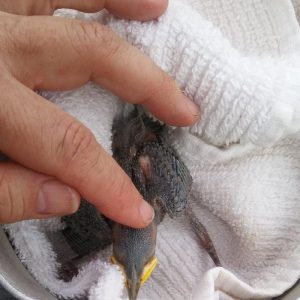 After showering for the next round of fun, the bunch of us went to an Italian restaurant where we indulged in mangia and music. There was a 1960’s-70’s cover band called Bad Hair Day whose music compelled us to dance.

The next morning I had a delightful interlude with a lover in whose presence I feel well cared for and nurtured. He and I entered each others’ lives five or six years ago and our paths cross every few months now. It is as if no time has passed and we pick up where we left off.

A few hours later, I found myself surrounded by 21 other PJ-clad cuddly souls as I facilitated one of my favorite workshops called Cuddle Party which offers guidance on communication and boundary setting, as well as provides an opportunity to experience safe, nurturing, non-sexual touch, by consent.  I marvel at the response from people who enter with trepidation and leave glowing. A safe, sacred space is created for people to experiment with what does and doesn’t work for them and in many cases, open the door to healing longstanding issues. I love the idea that the world is a more loving place because of the thousands of people all over the planet have attended.

After the Cuddle Party, I packed up the car and prepared for my long venture home.  I was driving on 95 in Delaware and a large piece of something flew off the back of a pickup truck in front of me. I took a deep breath as it headed for my car and then lofted up into the sky and bounced into the lane next to me. Fortunately, it didn’t hit anyone else’s car either. A prayer of gratitude. Seems I had guardian angels looking out for me.

It occurred to me this morning that although we are not empty vessels needing other people to fill us up, it sure feels good when they do.