Guns and Religion— Enough is Quite Enough 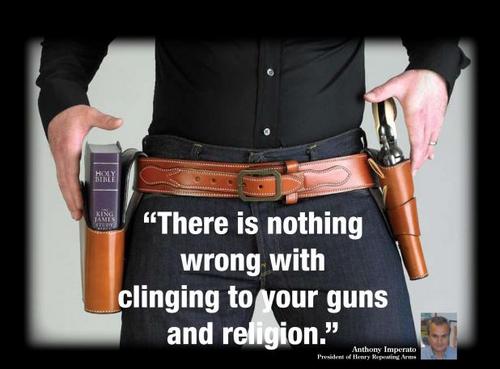 I was sitting at the traffic light when a pickup pulled up next to me.  On the back of the cab window was a bumper sticker saying ‘Guns and religion. Now more than ever.’   Then I found the picture you see above, and then this one below…… 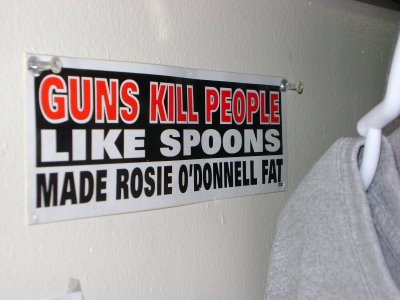 My response to this nonsense above is, I’d like to see you try and kill someone with a spoon!   In the wake of the tragedy in Tucson, where people were killed with a man wielding a legal gun which had legal clips of huge number of bullets in them,  it’s time to say enough is enough.  To my fellow Christians that like to think guns and Christianity go well together—  enough is more than enough.  You are living in denial of the Gospel, and its time to grow up.  ‘Thou shalt not kill’  does not have a codicil of addendum to it which reads ‘except in self-defense’ or the like.   But let’s deal with the gun issue itself.    We need to clear away some of the ridiculous rhetoric of the gun lobbyists.

1) Myth Number One—- ‘Guns don’t kill people’.   Really?   Go to morgue after a homicide and ask the mortician the cause of death in a fatal shooting.  The medical answer is simple— a bullet entered the person’s brain  (or elsewhere).   How did the bullet get there?  It was fired by a gun!   Ah, but a person fired the gun so, the gun is not a fault.  This too is not entirely true.  A person who merely hand tossed bullets at people could not kill them that way.  No, the gun was a necessity, especially in Tucson if you wanted to do as much damage as you could.  Had the young maniac merely tried to strangle someone to death he could have been subdued very quickly,  and the same if even he had wielded a knife.  No, guns are indeed a huge part of the problem, especially guns that can shoot more bullets than my grandfather’s old one shot derringer.   It’s time to own up to the fact that guns, and the ready access to guns, are a huge problem in a culture full of sick people.    At a minimum certain kinds of guns should be banned altogether, oh let’s start with assault rifles.

2) Myth Number Two— ‘If we ban guns, only criminals will have guns’   No, law enforcement people will also have guns as well. Not to mention the National guard and the various branches of the military.  The issue is private guns, and that brings us to the next myth.

3) Myth Number Three— The Constitution and the Bill of Rights gives the private citizen the right to own whatever gun his heart desires.    In the first place, the law was originally set up allowing each of the colonies to have militias.  It was not set up to protect a right of private citizens to have any and all sorts of guns.  It simply wasn’t.   Besides all this,  a cannon is a gun.   A  howitizer is a gun.  And guess what?  Private citizens already do not have a right to own and operate such things.    We need to ban a few more weapons that can do huge damage.   It’s way past time for such legislation.

4) Myth Number Four— Hunting Animals  (e.g. Deer) is a Sport   It would only be a sport if two teams could play, which is to say, it would only be a sport if the deer were armed and allowed to fire back!   As it is, it is much too one sided to ever deserve the title ‘sport’.  BTW, the weapon which shot Congresswoman Gifford was bought at the euphemistically named store— the American Sportsman.   Sportsmen play games like basketball.  Buying and using a gun doesn’t make you a sportsman.   It makes you a killer of animals or human beings.

5) Myth Number Five— The Best Way to Protect Yourself and Your Family is to Buy Guns
The statistics are in on this one.  Unless it was a law that you had to be trained first how to properly use a gun before you could buy one, and then pass a test to do so  (like you have to be trained to drive a car  and tested before you can legally drive one),  then we shouldn’t be surprised that arming yourself is not the safest way to go.   Why not?   Because on average, private citizens are more likely to shoot themselves, their own loved ones,  the dog, the cat,  quite by accident,  than they are likely to shoot an intruder who comes into their home, and startles them.   What you do under those fearful circumstances you do under duress, and often in panic mode.  The results are not usually what you’d hoped.  That’s a fact.

And now lets talk for a moment about guns and religion.  I hardly need to tell you that those two things put together can be a lethal combination just as much as bombs and religion (think Al Queda).  Should we have a Constitutionally protected right to carry bombs?   I don’t think so.

But even if you ignore everything I’ve just said, or disagree with it all,  I have to tell you that shooting someone is a terrible witness for Christ, and frankly when Jesus said love your enemies, he did not mean love them to death at the point of a gun.   That’s no way to love them, and I would say following Christ is not compatible with shooting and killing people.   But, perhaps you will say, that’s just me,  BW3.     But it’s not just me.   It’s Jesus you have to answer to,  and as for that picture at the top of the page here—- he’s not too pleased with it either.