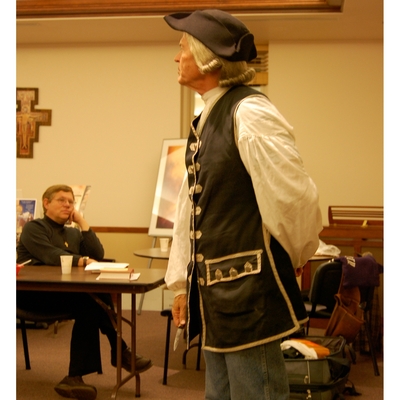 Sometimes spiritual formation literature can get pretty weird and demanding, especially if you are an ordinary Christian just trying to improve your Christian life. Sometimes it sounds like you are being called to be some sort of individualistic spiritual superman or superwoman.  John Wesley had a good deal to say about the wrong sort of spiritual fanaticism that involves more heart than light, that reflects a zeal, but not according to knowledge. And sometimes too, the call comes in the form of  insisting, ‘if you don’t have the spiritual gift I have, then you are not a Spirit-filled, mature Christian.  Wesley had serious problems with such claims. Here is a famous quote.

Religion is the
spirit of a sound mind; and, consequently, stands in direct opposition to
madness of every kind. But I mean, it has religion for its object; it is
conversant about religion. And so the enthusiast is generally talking of religion,
of God, or of the things of God, but talking in such a manner that every
reasonable Christian may discern the disorder of his mind. Enthusiasm in
general may then be described in some such manner as this: a religious madness
arising from some falsely imagined influence or inspiration of God; at least,
from imputing something to God which ought not to be imputed to Him, or
expecting something from God which ought not to be expected from Him.—  John Wesley Sermon on ‘The Nature of
Enthusiasm’[1]

One of the great problems in the 21rst century
church is the problem of time.  This is
all the more a problem during an economically difficult time.  People have to work, work hard, to find a
job, or provide for their families, or pay off their college education, or the
like.  When they are not busy doing such
things, they are resting, or occasionally having a bit of fun with their family
or friends.   There are frankly not a lot
of hours in the week for religion of whatever sort.

And so it is, that when the spiritual gurus call a
person either to extreme spiritual athleticism (“drop everything and come to my
seminar’) or alternatively they serve up pablum in the form of ‘chicken soup
for the soul’, it is no wonder that the Christian public gets confused about
what the normal Christian life should look like.

Is spiritual formation like some sort of hothouse
flower that requires a self-contained environment where ‘heat’ is the constant
requirement just to produce any sort of growth at all?   Is it some sort of human self-help
program?   Is it all about deep
introspection and intense feelings about God?
Is it the seeking after some sort of cathartic religion experience?  In short, folks get discouraged because they
feel like they either don’t have the time or don’t have the energy, or don’t
have spiritually what it takes to do spiritual formation.  And this is unfortunate.

John Wesley certainly had some thoughts about this
whole matter, and one of the interesting things about Wesley is that he did not
think one size of spiritual formation fits all.
In fact he set up societies, classes, and bands, three different levels
of spiritual commitment to help persons at different stages in their spiritual
growth learn to draw closer to God.  And
while Wesley was all in favor of a Christian having a deep and abiding love for
God and neighbor and manifesting the love and joy and peace as the fruit of the
Spirit in their lives, on the other hand, John Wesley was not a fan of what was
called ‘enthusiasm’ in his era, by which was meant religious fanaticism.  As the quote above from Wesley shows, his
view was that true religion, true ‘enthusiasm’ in the positive sense,  was the spirit of a sound, rational
mind,  not someone who had taken leave of
their senses.  It was also not about a
Christian needing to go through some dark night of the soul experience in order
to truly commune with God.

What Wesley goes on to stress in the sermon we are
quoting here is that false enthusiasm is seeking the ends without the means,
seeking something from God directly, that he in fact regularly and normally
gives through the communal life of Christ.  Here’s how he puts it at the end of this
sermon—

“Beware,
lastly, of imagining you shall obtain the end without using the means conducive
to it. God can give the end without any means at all; but you have no reason to
think He will. Therefore constantly and carefully use all those means which He
has appointed to be the ordinary channels of His grace. Use every means which
either reason or Scripture recommends, as conducive (through the free love of
God in Christ) either to the obtaining or increasing any of the gifts of God.
Thus expect a daily growth in that pure and holy religion which the world
always did, and always will, call “enthusiasm;” but which, to all who
are saved from real enthusiasm, from merely nominal Christianity”

What then are the ordinary channels of God’s
grace?   While of course they include
things like prayer and Bible reading that we can do on our own (which we will
discuss later in this study), but in the first instance Wesley is talking about
things we do together— participating in the weekly worship of God, and if
possible in the sacraments with the body of Christ, and participating in the weekly
study of God’s Word.  In Wesley’s own day
it also meant attending the society, or class, or band meetings as well.

To begin with then, the normal Christian life
involves doing one’s best to observe the Lord’s Day every single week.   It involves coming prepared each week to
wholeheartedly get caught up in love and wonder and praise of God in Christ
with the congregation.   We will say more
about this in a minute, but it needs to be added that participation in learning
about God through Sunday school or Bible study or small groups, learning with a
group of fellow travellers, fellow Christians, is equally important.

The Christian life involves both education and transformation, both
learning and loving, both fellowship and worship, both being lifted up in
spirit and being enlightened in mind.
The normal Christian life needs balance not only between work and rest
and play, but that life cycle needs to include worship and learning as well.  To some degree the Christian faith is
something caught, through participation in worship, to some degree it is
something taught, through Christian education.
And in a Biblically illiterate age, we need large doses of both.

[1]
All quotations from the works of John Wesley are from the Jackson editing which
is in the Public Domain and readily available in various places online.