‘The American’— Clooney the Assassin 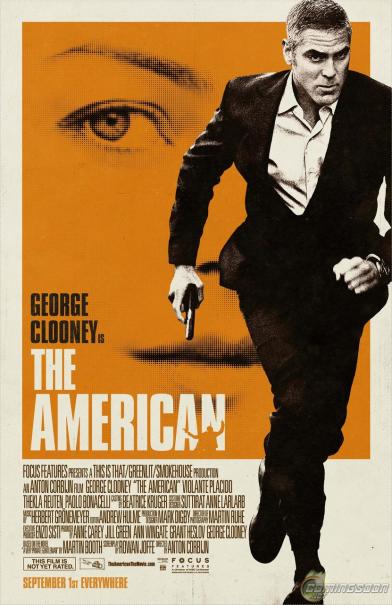 The life of an assassin cannot be easy.  They must always look over their shoulder.  They must never engage in lasting relationships that would compromise their anonymity.  They must live a life on the run, and mostly alone.  So much for the romantic James Bond life, which is a pure fantasy.  This movie about a secret agent at the end of his career and at the end of his rope is much more realistic, somber, and sobering.  Fear is the operative mood of this movie, and it is played out in slow motion. It makes an hour and 45 minute film seem much longer.  And full disclosure, there is some full disclosure of some beautiful Italian women— one in particular. This is not a movie to take the kids to, and it earns its R rating for the nudity.

It is almost required by law for anyone living in Lexington Ky. that you go see the movies by the homeboy made good, and for the most part I have followed this requirement. I enjoyed the tension in this film, and it is nice to see Clooney play a more introspective role.  He is just as lonely and just as randy as he was in Up in the Air.  This movie at least has some resolution to the problem.   The movie is filmed in small towns in Italy, but even they look drab in most of this movie because the cinematography punctuates the mood of the movie– gray,grainy, grim.  Cut out a slice of fear, and eat it for breakfast.

What most interested me in this movie was the relationship between ‘Jack’ (Clooney) and the local priest.  This is an interesting relationship because it deals with the issue of sin, repeatedly. In one interesting scene, the priest agrees with Jack that all persons are sinners, but then Jack confronts the priest with his own sin, and he confesses!  ‘Jack forgive me for I have sinned’. He had fathered a child out of wedlock.  In an even more interesting conversation, the priest tells Jack, over dinner in the parsonage—- ‘a man can be rich, if he has God in his heart’.    When the priest implores Jack to confess his sins, to open his heart to God,  Jack’s response is—- ‘I don’t think God is very interested in me Father’.   The Father responds that God has a heart full of love, even for the notorious sinner.  As the film progresses, it becomes clear that Jack’s guilty conscience is looking for some salve, and in the deepest part of his being he wants a normal life— with love in it.

This film is neither a comedy, nor a tragedy. In some ways it is a modern morality play, of a nihilist sort (‘the wages of sin is death’).  It is hard to muster much sympathy for an assassin, after all.  And yet there is something about the humanity of Jack, and his growing revulsion for what he does for a living, that makes it a compelling watch.  We know this story is going somewhere, even if we are not sure we will enjoy the ending.  What is certain is that there is not much joy in the journey for Jack.  It’s more like the highway to Hell, and as the priest says to Jack, ‘you know Hell is real, because you are already living in it.’  In someways this movie reminded me of an old Stephen Stills song……

‘There’s  a man with a gun over there,
Step out of line, you’ve got to beware….
Stop hey what’s that sound,
Everybody watch what’s going down……’

This movie reminds us of the dark underbelly of life. But sometimes, we need to be reminded of that, lest we live in a fantasy world when it comes to good and evil.

What Will You Do?
archives most recent
More from Beliefnet and our partners
previous posts