Of Inflatable Churches and Holographic Pastors

Sometime back I told you the story of an inflatable Catholic Church a priest was using on a beach to get Catholic beachcombers to come to Mass and take the sacrament, apparently with some success.  Below is a picture of said ‘church’—- 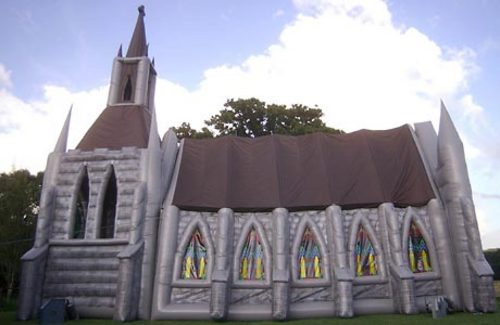 Now, alert reader Craig Beard has sent me a CNN article about the Holographic preacher.  The article by John Blake begins as follows—-
———-
The Sunday morning service at Fellowship Church in Dallas, Texas, was humming along with
hymns and prayers when something unusual happened.

The lights in the
sanctuary suddenly dimmed, and members of the church hushed as they peered at a
pulpit shrouded in darkness.  The parishioners then erupted in cheers and
whistles as Ed Young Sr., the church’s senior pastor, emerged from the darkness
with a microphone in hand.

“Please be seated, be seated,” Young said as
he grabbed the Bible.  “How are you guys doing today?  Doing well?”

Young
delivered his sermon, but he couldn’t hear or see his congregation respond: He
wasn’t physically there.

Young’s parishioners were instead looking at a
high-def video image of their pastor beamed into their sanctuary from a “mother”
church in Grapevine, Texas.

Young is part of a new generation of pastors
who can be in two places at one time.  They are using technology — high-def
videos, and even holograms — to beam their Sunday morning sermons to remote
“satellite” churches that belong to their congregation.
(more on the CNN website).
————-
My focus in this blog post is to ask and answer the question—- Is this a good thing, and what are the potential problems with this model of ministry?

Let’s consider the promise rather than the problem side of this model.  On the positive side, if one really does have the gift of preaching, I would far rather hear a good sermon from a remote pastor, than a not remotely good sermon from a present one. Holographic images make this possible, and some churches are investing $50,000 to 2 million dollars to go hi tech in this way.  There is furthermore the point that, like or not, we live in the visual learner plasma screen generation.  I once had the humbling experience of taping a class live in the TV studio and had a remote group of students watching on a screen in a classroom as well as students in the studio with me.  My assumption was—- all would have preferred to be in the studio with me.   Boy was a wrong.  Various of the students in the remote classroom said “I like virtual Ben better than real Ben”.  He’s bigger, and easier to watch and follow.  After swallowing my humility I began to rethink deliver modes when it comes to good teaching and preaching.  For sure, more people can be reached simultaneously using the holographic transmission model from a live (or taped) original.

What are the problems with this model, and do they outweigh the promise?   First of all,  I was very unimpressed with the rationale given by Pastor Young for doing things this way. He argued that Paul used letters to congregations he couldn’t be with to communicate with them from a remote location. This is a very lame argument since those letters were orally presented by various Pauline co-workers (Timothy and Titus and Phoebe for example) in rhetorically effect ways  in person.  The pastor seems to have overlooked this minor detail.  There was always an embodied real live person delivering the message in Paul’s day, whether it was Paul or one of his co-workers.  This practice provides no precedent for what Pastor Young is doing.  Were he to follow the Pauline precedent, he would send a real person to his other umpteen churches to deliver the same message.  The second major problem with this model is of course the disconnecting of preaching from pastoral care and getting to know one’s people.  Again, a rationalization is given in the Blake article that goes like this– “I actually have more time for pastoral care with people by not having to go to multiple locations to preach the same Word’.   This is a weak rationale, because the ‘more time for pastoral care’ only applies to congregation members in the mother church, apparently.  And this brings up a further point.  The holographic pastor, unlike the Pastor Paul, is not available for personal interaction, for questions or counseling after the message is delivered.  This is simply left to the ‘staff’. In other words, this just further promotes the preacher superstar model with less accountability, and less weekly contact and accessibility with the full scope of one’s congregation.

But this brings up another point—-are multiple churches in multiple locations without a local preacher really all part of one body of Christ?    Here is where the real rub comes.  The answer is no.   Above all else, the body of Christ is local, and locally expressed in the NT model— the church in Corinth, the church in Ephesus, and so on. In Pastor Young’s situation we are dealing with multiple bodies of Christ for sure, in very different locales, sometimes not even in the same town. This is not what the NT generally means by ‘body of Christ in….’.
A body of Christ, including its leadership structure must be locally accountable, whatever other bodies and groups it is accountable to.  In this holographic model the preacher is not accountable to the remote congregations, nor is he regularly fellow-shipping with them apparently.

Go back and read Act 2 and 4— and underline the bit about ‘and they were altogether in one place’ and then the bit about and they were all in one accord.  Those two things are connected. You can’t have embodied fellowship and embodied worship with a body of believers unless you are present with them.    I could say more but here I will just conclude—  while this technology may be very useful for evangelism or exigent circumstances, it does not, on the whole, seem to comport with Biblical models as to how the body of Christ is supposed to work, and my big fear would be that it would make it all that much easier to allow proclaimers to operate without accountability to his whole people, as well as to God.