Beware of the Dogs– Philippians 3.2

One of the real problems in Biblical scholarship is that it is too often an armchair profession.  Biblical scholars sit in their chairs and study and write. This is good as far as a it goes, but if you don’t go and do some field work, you are bound to make mistakes. By this I mean spending time on the Biblical sites, consulting archaeologists, reading inscriptions in situ and the like. One good illustration of my point is what scholars do with Phil. 3.2. I am currently writing a socio-rhetorical commentary on Philippians for Eerdmans and the following excerpt from the first draft will illustrate my point.  Scholars have tended to think Paul is talking about wild dogs, scavengers and the like.  In fact they repeatedly make the point that dogs were not household pets in antiquity. This generalization is in fact false. Especially in wealthy homes there were guard dogs, as we can see at Pompeii and elsewhere where we find the famous warning  ‘beware the dog (or dogs”.   For example here is a famous illustrations from the front door area of a Roman villa…… 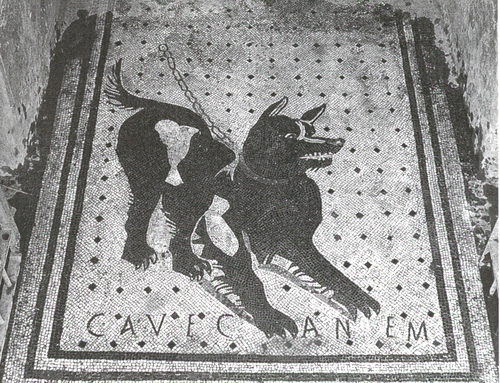 So here’s my commentary on this Philippian text.

Vs. 2 begins with a warning— ‘CAVE
CANEM’ to use the familiar Latin phrase.
Although ‘dog’ here in Philippians is in the plural nevertheless this was a very
familiar warning found in the marble floors of entry ways to villas in Roman
cities all over the Empire, normally with accompanying picture of a dog on a
leash.

It is hard to doubt that there were
such houses in Philippi, a Roman colony
city.  Only now in an interesting twist,
Paul is suggesting that the Philippians should not allow the dogs into their
houses and house church meetings, rather than a literal dog keeping such  dog gone people out.  But is Paul talking about
a mere hypothetical potential situation, or an actual one?

G.D.
Kilpatrick has argued that the verb blepete
with an object in the accusative can have the sense of ‘consider’ rather
than ‘beware’.  He points to a text like
1 Cor. 1.26 where Paul urges “consider your calling”, or possibly even more apt
1 Cor. 10.18 where he urges “consider (blepete)
Israel
according to the flesh”.[1]  If one goes with the translation ‘consider’ in

Phil. 3.2 then Paul would mean ‘consider the example of my perennial thorns in
the flesh, the Judaizers’ used as a negative example, without any implication
they are currently plaguing the Philippians.
Here is where rhetorical analysis comes into play.  Notice the threefold repetition of blepete here and the sense has to be
‘watch’ in the sense of ‘watch out for’ as this is a clear threefold warning
changing the epithets used to describe the singular adversary warned about–an
example of rhetorical ‘amplification’[2]  The warning is rhetorically strengthened by
each of the objects of the term beginning with the Greek letter kappa–kunas, kakous, katatom?n. [3]   “Since
Paul repeats the imperative watch out three
times and each time attaches dangerous direct objects…to the verb, the direct
objects color the verb with the meaning of a warning to be aware of or watch out for something hazardous…harmful
adversaries.”[4]  This is why the translation’beware’ is
perfectly appropriate here, especially when we consider the common cliché about
dogs.  I doubt Paul has in mind mere wild
dogs or scavengers.[5]  He is talking about guard dogs, in this case
‘dogs’ who see themselves as guardians of Jewish orthopraxy. This is invective and polemics of the highest order.

Without question kun? on Jewish lips (and others) could
be and often was a derisive term, in this case which could refer to
uncircumcised, hence unclean, persons, including especially Gentiles (Deut.
23.18; Is. 56.10-11; 2 Pet. 2.22; Rev. 22.14-15 and see the handling of Exod.
22.31 in Mishnah Ned. 4.3 and Bek. 5.6).
Generally speaking dogs were not pets in antiquity, but rather ran wild,
but there was an exception— the guard dog (see above).  Paul with rhetorical flair here has changed
the term ‘dog’ so it refers to those who insist on circumcision.  Osiek calls this the vehemence of conventional
rhetoric in which opponents are excoriated, to create emotional distance in the
audience from such people and their views.[1]

read next post
Apocalypse Soon......... On DVD
archives most recent
More from Beliefnet and our partners
previous posts