The Earliest Temple in the World 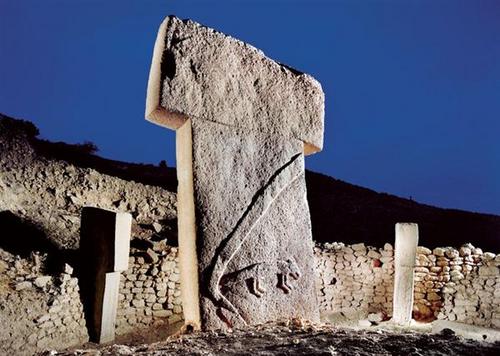 Eastern Turkey is a fascinating place, and increasingly it is being recognized as one of the cradles of ANE civilization.  We now have considerably more grist for that mill with the announcement of the discovery of a Temple 11,500 years old.  Yes, you heard me right, and you can see a picture of one of its remarkable monoliths and a wall as well.  The site is called Gobeckli Tepe, a whimsical name which meas Potbelly Hill, due to the shape of the mound, and it is near two sites where Mark Fairchild and I have spent time in recent years— Shanliurfa and Haran (of Abraham fame).  This temple lies west of the Biblical plain called Haran and is only 20 miles from the Syrian border. This places it right in the fertile crescent which begins below modern day Iraq, includings the Tigris and Euphrates rivers and winds its way north through Syria and into eastern Turkey.  This is the world not only of Genesis, but of the great Anatolian civilization of the Hittites (yes those Hittites as in Uriah the Hittite– husband of Bathsheba).  In short, if you are wondering if this is important to understand the OT, wonder no longer.  It is.

Klaus Schmidt and his team of Kurdish diggers have uncovered an enormous temple complex that pre-dates the Great Pyramids by some 7,000 years and Stonehenge by at least 6,000 years!  Yes, you heard me right.  The evidence suggests this would have been one of the first substantial buildings built after the last major Ice Age on earth. Klaus in fact calls this whole complex of structures the Rome of the Ice Age.   What is included?

First of all there are circles of  polished stones, some are 17 feet high,. with flooring and and double benches where people could sit.  Each of these stone circles feature a huge T-shaped stone like the one depicted above.  In this respect these stones are like the ones on Easter Island.  After 12 years of hard work, Schmidt has found at least four temple complexes.  The radar scans of the area indicate there is a huge amount more to uncover here.  And Schmidt has a thesis about this temple complex— here is a short excerpt from the Newsweek article on this—

“Schmidt’s thesis is simple and bold: it was the urge to worship that
brought mankind together in the very first urban conglomerations. The
need to build and maintain this temple, he says, drove the builders to
seek stable food sources, like grains and animals that could be
domesticated, and then to settle down to guard their new way of life.
The temple begat the city.”        Here is the link to the entire article which you can cut and paste into your browser.

The importance of this find for Biblical thinking is this— the Bible says that from the outset, human beings were created in God’s image.  Human beings were religious creatures from Day One.  Archaeologists and sociologists have long dismissed this theory saying organized religion comes much later in the game than the beginning of civilization and city building.  As  Ian Holder director of Stanford’s prestigous archaeology program says— this is a game changer. Indeed, it changes everything experts in the Neolithic era have been thinking.   Schmidt is saying that religion is the cause of civilization, not the result of it. Towns were built to be near the Temple complex. Agriculture was undertaken to feed those living there and supply the temple complex, and so on. The first instincts of humans were to put religion first. Maybe there is more to that Genesis story than some have been willing to think or admit. Maybe human beings are inherently  homo religiosis.

Schmidt says that about half of the 50 stones thus far unearthed have carvings on them— half.  This makes this site very different from Stonehenge.  While we have lots of animal carvings on these stones, and a few abstract symbols what you also find is human hands and arms– the T shape stones seem in some cases to be representations of humans praying, “In the Bible it talks about how God created man in his image,” says
Johns Hopkins archeologist Glenn Schwartz. Göbekli Tepe “is the first
time you can see humans with that idea, that they resemble gods.”  This site pre-dates the earliest Biblical ruins, of Jericho, by 1,000 years or more.

Why have we not heard of this before now?  Several reasons. First, because it is so huge and so significant that it will change all the textbooks on such matters, and archaeologists have been wanting to be sure of the dating and significance and nature of the site.  The site was actually found by an American in the 1960s.. but it was so huge he didn’t know what to make of it. Schmidt also almost walked away when he realized the enormity of what lay under the ground. He knew he would have to spend the rest of his life digging if he stayed. And he has done so.  Only 5% of this site has thus far been dug.  This will make the dig at Pompeii look tiny.  Whatever civilization was founded here, it ended abruptly about 8,000 B.C. and in fact the site was deliberately buried then. Many of the massive stones have been found in place, still standing upright where they had been originally placed. The site was not destroyed, it was buried.  There is much more to be done here, but suffice it to say, that religion and art are at the very heart of this temple complex. And that tell us a lot about the nature of primitive humans— a lot like what Genesis tells us as well.

The End is Coming!
archives most recent
More from Beliefnet and our partners
previous posts