Probably the most exciting of all the archaeological developments in Turkey is what has been uncovered on a hill overlooking the Celsus Library in Ephesos by the Austrians. And the Austrians are both meticulous and thorough, and their work on the terraced houses is spectacular. They have even built a state of the art roof over the hill and a walkway and  stairway so one can climb around and see the site without interfering with the work.  I was fortunate enough to be given a private tour of the site before it became a public tourist attraction and as the year comes to the end, I thought I would share some of my favorite shots.

Here is an overview of the site which shows some of the amazing wall painting and mosaics.  This was clearly the the high rent district in Ephesos, and various of these people could be called the literati– the well education ones.  They had mosaics of philosophers and deities inlaid in their walls.

The colors and range of depictions are as spectacular as you will find at Pompeii or Herculaneum.  Its just less well know and less well advertised than those in Italy.  Here for comparison is an image from Pompeii. 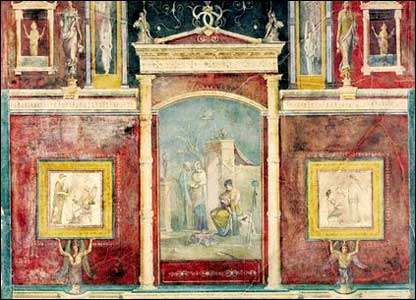 One of my favorite frescoes in Ephesos is the one of the Greek philosophers seen below. 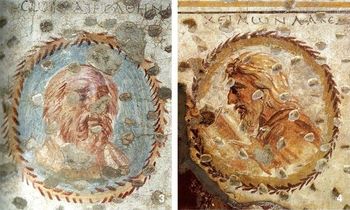 You can just see the Greek names of the philosophers above the picture.  Here below is a clear shot from above of one particular house that has white and red walls with pictures of deities and nymphs in every square. 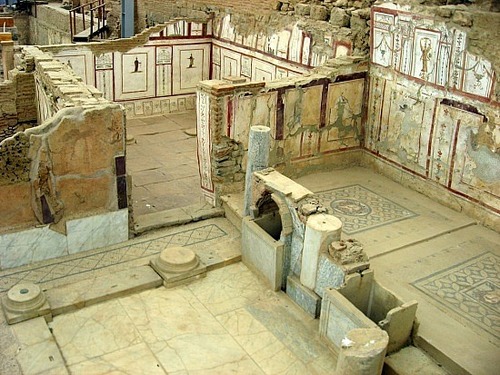 You begin to get a feel for how spacious some of these houses were.  The shot below shows you some of the brick arches connecting to marble columns. 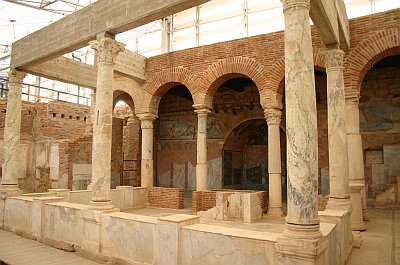 There are many other shots I could share with you but before I draw some conclusions here is one of the now famous mosaic of the god Dionysius and Ariadne. 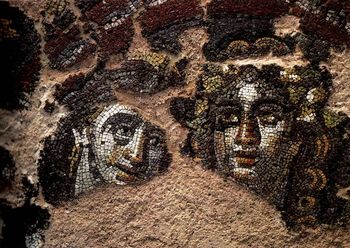 Why is any of this of importance for our study of Paul and his letters?  Firstly there is the matter of social context. A text without a context is just a pretext for whatever you want it to mean.  In this case, this archaeological work tells us how people like the Asiarchs would have lived as members of the uber-wealthy in Ephesos, less than 2% of the population. As we know from inscriptional evidence at Miletus and elsewhere, there were indeed Asiarchs in Paul’s day in this very region, some of the leading men of the province of Asia, and it was they whom Paul was warned by to flee Ephesos. (Acts 19.31). But how had he become friendly with them? The answer is clear— Paul was a person of high social status both in terms of his education and in terms of the fact that he was a Roman citizen. As such he was able to circulate among the elite of the society, even though he chose to step down the social ladder and live at a more humble level, presumably so he could share the Gospel with any and all up and down the social ladder.  It may well be the Asiarch who helped Paul procure a public place to teach and share his message, for we learn that in Ephesos, Paul did this at the Hall of Tyrannus.   Ephesos was certainly one of Paul’s most important bases of operation in the Greco-Roman world, and according to Acts he spent over two years there, longer than he spent in any other city that we know of.   Here too in Ephesos Johannine Christianity would be established as well by the Beloved Disciple and John of Patmos.   The more we know about the context of the NT writings the better we understand those writings, and the Ephesian terrace houses illuminate the life of Paul in various ways.  No one should imagine that early Christianity was chiefly led by a bunch of illiterate peasants. The documents of the NT give the lie to that assumption, and none do a better job of refuting this assumption than the letters of Paul.  Paul was equally at home with the Asiarchs as with the humble slave or day laborer. As such he was the ideal messenger in the Greco-Roman world of salvation for not only the least, last, and lost, but also for the first, most, and found.