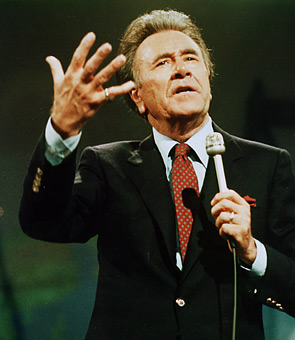 Oral Roberts was that most unusual of all kinds of Methodists–a Pentecostal one. He had a big heart, a large evangelistic career, and a big vision, even a vision of creating a huge medical center to go with the university he was founding.But of all the things we know about Oral Roberts he will undoubtedly be best remembered for all the faith healing services, and all the persons who benefited from his ministry.

Passing away at 91 years of age from pneumonia and complications from a fall, his son Rick, who had inherited the mantle of the Oral Roberts ministry from his father had these words of tribute to post on their website, calling his father—- “A modern-day apostle of the healing ministry, an author, educator, evangelist, prophet, and innovator, he was the only man of his generation to build a worldwide ministry, an accredited university, and a medical school. His name is synonymous with miracles. And he came along when many in Christendom did not believe in God’s power and goodness.”

He is right about this, and there is much more that could be said.I remember well before the fall of the Iron Curtain, that our Methodist church received requests from Methodists in Estonia.Their top request— that they be prayed for at the Oral Roberts prayer tower.The news of Roberts prayer and healing ministry even before computers and cell phones could not be kept out by the Iron Curtain.

Like Billy Graham, Oral Roberts was a man with a big vision, who believed, as John Wesley once said that “the world is my parish”. He could not be confined to Oklahoma or the small time tent revival circuit. He would attempt big things for God including 300 healing crusades in more than 35 countries.Like Wesley, he was a hard man to keep track of so often was he on the move, never mind keep up with.

Sadly, some of what Roberts will be most remembered for is really not what is most significant about him— namely his fund-raising techniques.Like many evangelists, Roberts was a charismatic speaker, and sometimes given to grand claims.In 1987, Roberts said during a fundraising drive for his television ministry that unless he could raise $8 million, God would “call him home.”He ended up raising more than $9 million for the campaign.In that same year he claimed to have raised the dead.Ten years before in 1977, he claimed to have had a vision of a 900-foot Jesus who told him to build a hospital. It was later in need of a major bail out and buy out.

Whatever one thinks about some of Roberts more colorful claims and ministry strategies, there can be no doubt about the great amount of good the man did in the service of Christ. Many people were indeed saved and healed as the Lord used this man all over the world.He was no charlatan, no snake oil salesman, but rather one who was in daily contact with the Lord from whom all healing ultimately flows.

I have on numerous occasions had various students at Asbury who were first trained at ORU.I can tell you now that they found that school a faith nurturing place as well as a play striving for academic excellence.They came to us with the right balance of head and heart, keen intellect and piety that would have pleased John Wesley no end.

Farewell Oral. We will see you in the Kingdom when it comes on earth where the healing waters flow from the throne, and the trees all have medicinal leaves. I am sure by now you have heard the approbation of the Master— ‘well done good and faithful servant, inherit the Kingdom’. A person should be remembered at their best and for their best work and traits. May we all be graded with grace at the Final Examination.