A Christmas Present to Nazareth– a House from Jesus’ Time 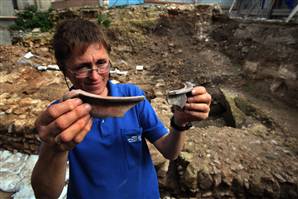 Meet Yardeni Alexandre.  He works for the Israeli Antiquities Authorities at the dig in Nazareth. He is holding  first century pottery shards found at what is becoming known as the ‘Nazareth house’.   The walls of the house itself and the pottery date this house to the early Roman period, which is to say, the era of Jesus.  Palestinian Christians in Nazareth, who are outnumbered by Muslims now two to one, celebrated the announcement of this find as a Christmas gift to them from God.  Here is a picture of one of the walls of the house itself. 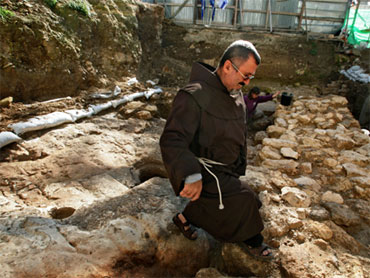 (The man in this A.P. photo appears to be a Palestinian Christian priest, inspecting the find).

What do we learn about Nazareth of Jesus’ day from this find?  Several important things. The find, coupled with what has been found elsewhere in the same vicinity suggests Nazareth was indeed a tiny, out of the way village, with possibly as few as 50 houses. This estimate is based on the tiny findings at the neighboring graveyard. No wonder one of Jesus’ potential disciples once asked ‘Can anything good come out of Nazareth?’  Cities, like people, had honor ratings in antiquity, and the honor rating of Nazareth was not even on the chart of top 100 cities,towns, and villages in Israel. A little village set on four acres would not draw much attention.

Secondly, Alexandre notes that caves have been found adjacent to some of these houses, that is places to hide from the Romans or other marauding bandits.  All was not quite in the Galilean hill country in Jesus’ day. The size and remoteness of this village however protected Nazareth from the destruction many Galilean towns suffered during the Jewish war in the 60s.

Thirdly, Alexandre stresses the Jewishness of all that has been found. Nazareth was not a cosmopolitan place. It was a small thoroughly Jewish village.  We can also note that the construction of stone is important.  It suggests both stability in the village, and little disturbance over long periods of time.  You don’t build with that kind of material unless you are expecting to stay.  Mudbrick homes or homes involving mostly mud and wood are less permanent than this house.  Notice however that despite the stone construction, no glassware or anything elaborate has been found at this site. Alexandre stresses the simple lifestyle of those who lived in this Jewish house.

Coupling this find with the already impressive recreation village in Nazareth, there is now much to see in the town besides the Basilica of the Annunciation.