The SBL in New Orleans– Archaeological Revelations Part One

The annual national meeting of the Society of Biblical Literature met this year in New Orleans last weekend, which I have to confess I would be glad to meet in every single year. The French, Cajun, and Creole food is great, the jazz is double great, the mild climate in late November is great (mid-60s to mid-70s), the people are friendly, and the cost is less than most major U.S. cities– what’s not to like?  In addition there is this little meeting with lots of fun lectures and seminars involving 5,000 or so Bibliophiles.

I must admit that this year I really over-booked myself– I had an ETS seminar on commentaries to do on my Matthew commentary Friday afternoon, a lecture at the apologetics seminar at New Orleans Baptist on Dan Brown’s The Lost Symbol Friday night, a lecture on Oral and Rhetorical Texts at the BAR Biblefest Saturday morning at 9 a.m. and then a Matthew seminar session Sunday morning (see the previous blog post).  But somehow on the rest of Saturday and Sunday and Monday I managed to hear some good jazz in the French Quarter, sing some do wop with three soul brothers on Royale St. (Platters, Drifters, and Temptations) snarf up some beignettes and crawfish and jambalaya and moufaletas, keep my publishers happy, see some friends, and learn something.. especially at the sessions on Recent Excavations and Discoveries in Galilee.

The lectures that were more most helpful were Mordecai Aviam’s on Synagogues of Galilee, Dan Showalter’s lecture, C.T. McCullough on Khirbet Qana and Andy Overman’s superb discussion on various locales in the Galilee including the discovery of the first century A.D. synagogue at Migdal.

This post will focus on Migdal, but first some general considerations that came out of these sessions: 1)  its time to stop talking about some sort of strong Roman presence, particularly a strong military presence in the villages and towns in Galilee, and equally it is time to stop talking about taxation so severe that the locales couldn’t survive and to stop talking about large estates in Galilee swallowing up all the land of the small land holders in Galilee, and to stop minimizing the profoundly religious character of these villagers in Galilee.  2) its also time to stop talking as if Jesus was a peasant, by any definition; 3) its time to stop talking about a ‘Temple domination system run from Jerusalem (see the critique in A.J. Levine’s A Misunderstood Jew of this sort of talk), when in fact it appears that most Jews gladly celebrated the feasts in Jerusalem and support the Temple; 4) it is also time to stop talking about Jesus largely alluding to the Imperial cult or the empire of Caesar as a counterfoil to his discussions about God’s eschatological Dominion breaking in through his ministry (see e.g.the critique in Chris Bryan’s  Render unto Caesar).  In other words, its time to say that the archaeological and historical evidence do not really support the exaggerated claims of Dick Horsley and Dom Crossan and others on these matters.  Far better to listen to those doing the archaeology in the field like Overman and Showalter who are much more guarded in painting the picture of Jesus’ context and social world.    Let’s take a couple of examples from the actual archaeology of the region that illustrate my point.

Migdal was a little fishing village on the northwest corner of the Sea of Galilee, between Capernaum and Bethsaida. It’s most famous resident, Biblically speaking was named Miryam of Migdal (aka Mary Magdalene).  Our first picture is of the aerial view of the synagogue which has been recently unearthed there— 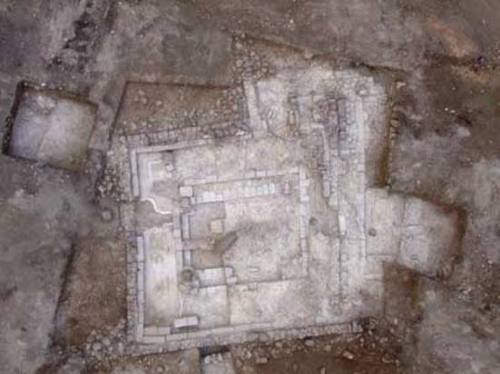 This is a quite substantial building (10 by 10 meters) and indeed a purpose built building (not a home used as a synagogue). Both the in situ coins and the pottery found date this to the first century A.D.   This is the kind of place Jesus will have visited in his travels along the sea of Galilee, as the Synoptics inform us.   Below you will see the elaborate artistic work done for this synagogue that has been unearthed. 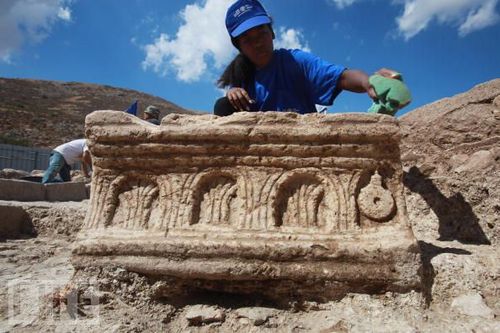 Even more spectacular is the following find… 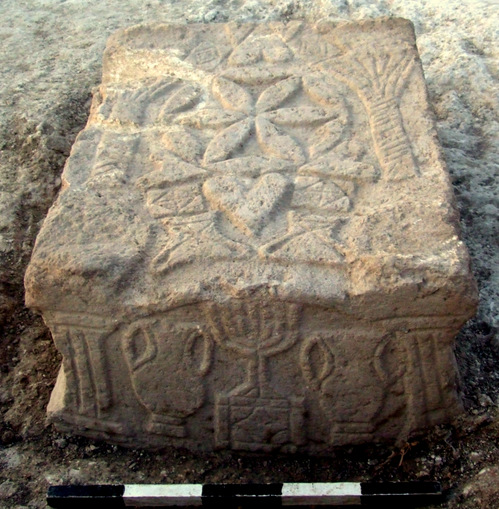 The best guess as to what this is a stone base for a table on which Scripture scrolls might be rolled out (Aviram’s suggestion). Notice not only the nice menorah on the end of the base as well as the amphorae and the floral patterns and the trees, presumably palm trees.  Someone went to a lot of trouble to make this for a synagogue in a tiny, tiny town like Migdal.  And this brings me to a crucial point. It is always a critical mistake to downplay the piety of early Jews and their dedication to their religion, even in the small villages and towns in Galilee. In McCullough’s lecture on Khirbet Qana (probably the site of Biblical Cana) he pointed out the remarkable number of mikvas, ritual bathing pools, found in this tiny town as well as amphorae with Aramaic inscriptions on them.  This comports with the finding of numerous Jewish nationalistic coins (e.g. Maccabean ones) in various of the digs in Galilee.

The attempt to reduce the discussion to matters of pure economics or politics will not work in analyzing Galilee or Galileans in general in the first century or the historical Jesus, but at the same time one must not ignore the importance of economic and political factors in the analysis of the region.  There must be some balance, and for my money Andrew Overman’s work shows the right sort of balance about such matters.  As Overman reminds us, changes in Galilee came slowly before the Jewish wars, and gradually. Roman intrusion was not drastic or pervasive, and is largely in evidence on the perimeter of the Holy Land at places like Omrit and Caesarea Philippi, places where there was a Romanization of a site that was already a Hellenistic Greek area or town. In the purely Jewish traditional villages within the Holy Land region known as the Galilee one can in fact not really find much evidence of Romanization. Instead what one finds in Aramaic inscriptions and mikvas and the like.

The archaeological evidence as we have it needs to be carefully sifted and then compared with the literary evidence in the Gospels themselves. In my view there is really no basis for seeing the Jesus movement as a resistance movement launching out against an ever more intrusive Roman presence in Galillee. Indeed the teaching of Jesus is about nonresistance!

Jesus was not a Zealot, nor an encourager of those who lived by the sword. Nor was he happy when his own disciples took them up (see the episode in the Garden of Gethsemane with Peter and the high priest’s slave). Jesus was indeed the prince of peace who road into Jerusalem not on a war charger, but on a donkey (see the prophecy of Zechariah).  Neither Jesus nor his disciples objected to paying their taxes or the tribute money, indeed there are repeated stories of Jesus’ dining with tax collectors and recruiting them to be disciples.

If anyth
ing, Jesus saw Caesar and other such rulers as an irrelevance, which could not stop or aid the coming of the eschatological Dominion of God on earth. Indeed, Jesus is reported to have said that Pilate would have had no authority over Jesus if God had not granted it to him.  Human rulers and human kingdoms were not Jesus’ main concern.  Bringing salvation to one and all, was, a salvation which certainly had social and political dimensions and implications, but one of them was not setting up a pattern of opposition to Romanization in Galilee.  We will say more in our next post. 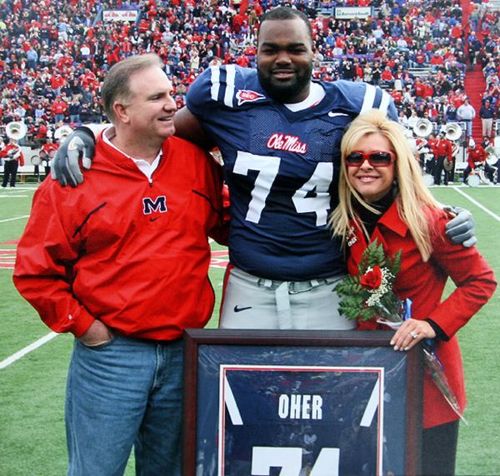