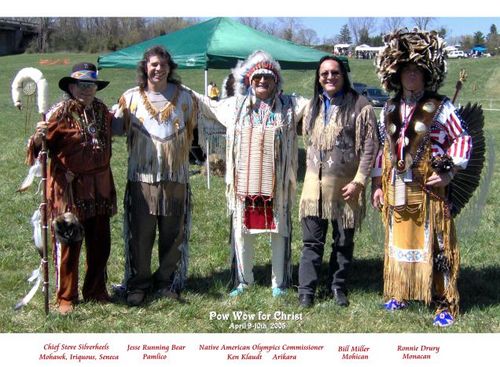 The man on the far left in this picture, Chief Steve Silverheels, is a minister who lives in Wilmington N.C. not far from my mother.  He is a Christian minister and evangelist. He is also a native American with Mohawk/Iroquois/Seneca ancestry.   If the name Silverheels rings a bell to some of you– it should.  The very first Native American to star on national television was his father, Jay Silverheels, better known as Tonto, the trusty companion of the Lone Ranger.

For a Methodist like myself ministry to and by Native Americans has always been a part of our heritage as well.  John and Charles Wesley, it will be remembered specifically came to America to witness to Native Americans in Georgia, though only John really got the chance to do so, and it could hardly have been called much of a success.  Nevertheless, Methodists have always had Native American members from the earliest beginnings during colonial days, and one of my earliest memories of an Annual Conference meeting was hearing the Cherokee choir sing Amazing Grace in Cherokee at Lake Junaluska N.C.  They had only had to travel a few miles from the Cherokee reservation in the mountains of N.C. to do so, where they had their own UM Church.

Steve Silverheels is interesting not least because the way he ministers involves indigenization, the sharing of the Gospel in a cultural way and language that speaks to Native Americans.  His story of conversion and ministry is a compelling one. His father we have already mentioned, but his mother was Jewish, and he attended a synagogue in NY as a very young boy, and then later a Catholic school.  Neither influence ‘took’ as they would say, and he spent much of his youth trying to divest himself of the Judaeo-Christian tradition.  But God, the Great Spirit got hold of this man in 1974 when he was a drug addict and an alcoholic, right after he got out of the Army.  Silverheels vividly recalls  “a visitation from the Lord. And I knew it was my last warning. I saw him descending on a cloud…I asked him to save me, and all I know was I woke up kneeling at my window and crying. I came to the knowledge that there truly was a God.”  (quoted in the Wilmington Star-News  in an article by Amanda Greene, from whose article I have culled much of this information).

One of the interesting features of Silverheels ministry is that by day he is a mailman, but in the evening he delivers a quite different sort of news— Good News.  Steve did not live with his father Jay growing up, though he saw him several times a year, but he did live for a while on the Seneca reservation near Buffalo and clearly enough he did come to embrace his Native American heritage, and continues to do so since his conversion.  He and his wife spent the years between 1975-95 ministering to Native Americans on the reservations in Arizona. among other things bringing clothing and food items to distribute. One of the more interest aspects of Silverheels ministry is faith healing. He is very clear to tell those who ask that he is not a healer himself, but he believes in healing and he believes he has been anointed by God to pray for healing of people. In fact he is called a healer by his fellow Native Americans.

Jay Silverheels, as it turns out, was a descendent of Handsome Lake, a famous Seneca Indian prophet.The Iroquois were some of the first Native Americans to embrace Christianity and the way they made sense of it to their own kin was by calling God the Father the Great Creator, Jesus the Great Mystery, and the Holy Spirit, the Great Spirit.   When Amanda Greene caught up with Rev. Silverheels, he had recently been speaking to the Wesley Memorial UMC United Methodist women’s meeting.

If you have interest in seeing a sample of his ministry you can go to www.youtube.com/user/ChiefSilverheels  or Steve’s own website  www.chiefsilverheels.org.

“And the Gospel shall be proclaimed to every tribe, and tongue, and people and nation, unto the ends of the earth”.