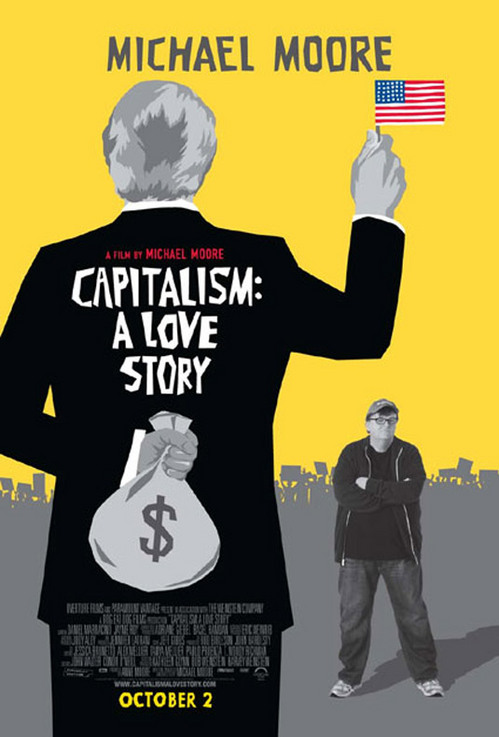 Michael Moore, our national agent provocateur, is nothing if he is not controversial.  But in a democracy with freedom of speech, it’s good to have prophets and pundits and pot stirrers and he is one such person.  Some find his docu-drama’s infuriating, some find them fascinating, some just find them funny.  I have found them all these things and more over time, and so my reaction to his latest salvo, against capitalism, or at least against its current greedy form in America, was quite unexpected.

I broke down and cried.  Cried repeatedly as I watched people evicted from their home,  fired from their jobs without severance pay, cheated and swindled out of their life savings and their family homes.  And this movie is nothing if it is not timely in light of the events which began to occur in America about a year ago.  I guess it is also the case that having just written a tell all book, entitled Jesus and Money  my feelings would be a little raw on this subject, especially after watching one prosperity TV preacher after another  lead needy people down the garden path.   I went to the movie expecting to laugh, and I did a bit, but I did not expect to cry and get angry with what America has become.

Over the course of two hours and a bit,  Michael Moore chronicles how things have changed in America since the 1940s.  He chronicles the deregulation of the banking industry, the rise outsourcing of most blue collar American jobs,  the dwindling of the Middle Class, and cutting in have of the tax rate of the top two percent of all Americans (from 90% to 45%), and the like, and something I had never heard of— FDR’s Bill of Rights for workers.  Something that never got passed and never saw the light of day. Michael Moore is a good story teller when it comes to people’s lives being laid bare and destroyed by greed and graft and corruption. And there are some heroic tales of workers fighting back as well.

But when I really lost it in this movie is when he interviewed his own local Catholic priests from in and round Flint Michigan who all to a man chronicled the evil effects of capitalism on their flocks.  Even worse, when he modified scenes from Zeferelli’s Jesus of Nazareth so that even Jesus sounded like a prosperity preacher, that was the coup de grace. What Jesus was made to say in this movie, sounding like a corporate exec from a Wall Street Bank, was so incongruous, so out of sych with what Jesus did actually say about unrighteous mammon that the point could not have been made more effectively.

Jesus surely loves even Bernie Madoff, but he despises  the behavior of those who run ponsie schemes, do predatory lending,  and the behavior of major corporations that secretly make millions off the death of their own employees, and so on.   Fortunately one day they like all of us will have to give an account for the deeds done in the body. No economic system that has so little checks and balances that it fails to take into account the deleterious effects of human fallenness and greed on human behavior is ever going to do justice to the poor and the disenfranchised. That is for sure.

And the sad thing is it doesn’t have to be this way. Moore rightly points out that the U.S. government set up the countries we defeated in WWII (Germany, Italy,Japan) with new constitutions that prevented the very sorts of tyranny of the rich over the poor, or dictatorships of money from happening to the degree and in the way they happen in America. He is right that: 1) you cannot find capitalism in the Bible any more than you can find communism in the Bible; and 2) that there are some serious tensions between a true democracy and so called free market capitalism.  But how to negotiate these tensions?  Therein lies the rub, and the Devil is in the details. And I am not competent to say.  What I am competent to say is that this is a good thought provoking, if tendentious, movie.  And I would suggest now is the perfect time for Christians in America to see it and do a rethink about what is good and godly when it comes to money and the economy.