John Calvin is Old, and Not Looking a Day over 500 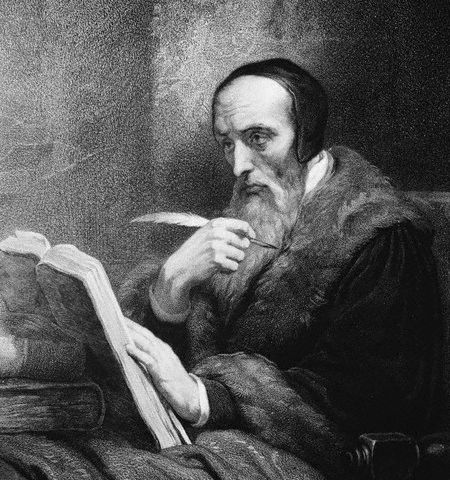 John Calvin’s birthday deserves to be celebrated, not least because he was one of the truly great Christian exegetes and indeed systematic theologians of all time. Never mind that I disagree with a great deal of what he has to say about God, his sovereignty, the nature of his grace, election, predestination, human freedom, and perseverance of the saints.  I will reserve comments on those sorts of things for my essay which will appear in the September issue of  Christianity Today.   Here I want to say some positive things.  A personal word is necessary at this juncture.

I attended a seminary. Gordon-Conwell, which was largely in the Reformed tradition, even though I was an Evangelical Methodist. I read Calvin, Beza, both Hodges, Warfield, Berkower, Berkof, Van Til and various others.  I enjoyed taking Calvin with T.H.L. Parker at the University of Durham in England during my doctoral studies and reading in his commentaries.  The end result of this is that I discovered that the bar had been set high by Calvin when it comes to careful exegesis, and consistent theological systems.

I also discovered along the way exactly why I am not a Calvinist, and became a more convinced Arminian as a result of reading Calvin.  I also discovered that Calvinism is actually in the main a redoing of Augustinianism, the theology of St. Augustine. It’s not actually a distinctively Protestant form of theologizing at all.  But Calvin deserves full marks for working out the logical implications of Augustinianism to the nth degree and adding some new wrinkles.

Above all for me, he is to be respected for understanding that Biblical theology can only be done on the basis of a detailed and comprehensive exegesis of all the relevant Biblical material.  This is precisely why I have waited until late in my career to write The Indelible Image in two volumes (the first volume will be out in Sept.), which is a comprehensive survey of NT theology and ethics.  I needed to follow Calvin’s lead and research and write commentaries on all the NT corpus first.  Exegesis is the basis of all good Biblical theology, and the latter should not be attempted without doing the former first.

My wife and I many years ago made a pilgrimage to Geneva. We visited the Reformers memorials, and I even sat in Calvin’s teaching chair (please don’t tell the elderly Swiss guard in that shrine). As a Protestant I owe Calvin, and Luther as well, much, as did my spiritual forebears John and Charles Wesley. The Calvinistic theology proved to be the iron offered by a brother which sharpened my own theology, just as George Whitfield’s sharpened Wesley’s.  And for this I am truly grateful.

I have fond memories of working carefully through Calvin’s Institutes for the first time, and being especially surprised and taken with his profound theology of the Holy Spirit and of the Spirit’s sanctifying work.  This resonanted well with my own heritage.  I remember reading in the Gordon-Conwell paper a rather interesting historical curio from a letter of Calvin about how one morning he woke up and founded himself speaking in ‘lingua barbaria’. The article speculated that Calvin may have spoken in tongues.  The notion of Calvin as an early Pentecostal produced some interesting and heated responses.

There is much more I could say of a positive sort about Calvin, but this must suffice. He lived by Bengel’s maxim– Apply the whole of the text (of the Bible) to yourself. Apply the whole of yourself to the text. Its a motto any Christian should be proud to live by.