The Ethics of Sports– On Being a Good Sport 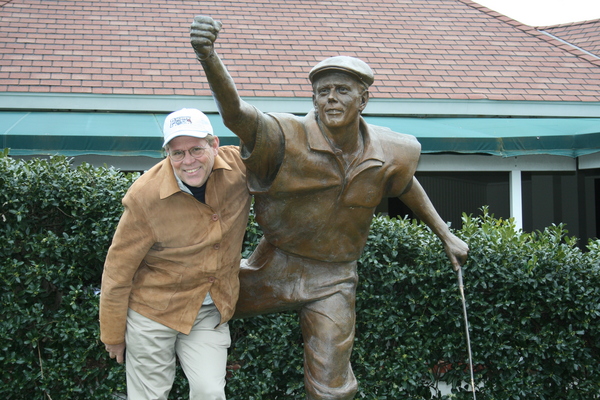 Yes that’s me with the reasonable facsimile of Payne Stewart at the most famous golf course in my home state of N.C.– Pinehurst No. 2.  In my once in a lifetime opportunity to play the course it was the coldest day on record in early April, and I nearly froze to death.  It was warmer at Carnoustie in Scotland when I had been there the previous January. Go figure.  And I played miserably.  I honestly don’t think I have played that badly at any time in the past twenty years— the score card said I took over 100 shots, when normally I would shoot in the 85-90 range even on a tough course.  Not on that given day.  And yet, as you can see from the picture, I had a great time and fulfilled a dream of both my own and my father’s to play that course once (and let me tell you the green’s fees ain’t cheap).

Different sports have different rules, but I am not interested in talking about the rules per se, but rather in human behavior in relationship to such rules. Golf is about the only sport I know of that is basically self-policed. You call penalties on yourself.  Yes, you heard me right.  It is a gentleman’s or gentlewoman’s game, and in it you have to stand vigilant against your own tendencies to cheat or be dishonest.  And, it mostly works, even when you are playing by yourself. You can only grant yourself so many mulligans before you start feeling ashamed of yourself.  What I am about to say, I am saying as someone who profoundly loves sports, and is a big fan and follower of many different sports.  I have played basketball, I have run the Boston marathon and two others, and I still play golf. Its part of who I am, but I am deeply troubled about what has happened to sports in America.

Over the past 2-3 decades, we have seen the coarsening of the American culture in general including the coarsening of sport and its announcing.  We have shock jocks on the radio who aren’t even jocks, and some of them don’t even talk about sports. Talk radio is awash with such crude and rude people. And we should stop listening to them.

Whereas in my youth, fighting was not allowed or at least immediately stopped for example in ice hockey, today you can go to an ice hockey match and a championship wrestling bout will break out. And its boring, and the players are acting like  boars as well.  But this is merely one example.   Another good example is the steroidization of baseball and football.  Cheating is something ‘everyone was doing’, until major stars started getting caught with their pants down, whilst absorbing a steroid shot in their posterior.  To what do we attribute the breakdown in ethics in sport, which merely mirrors the break down in ethics in the larger culture?

Well part of it has to do with a win at any cost mentality, which has affected and infected sports at all levels.  We find it particularly offensive when it involves our children in college sports, but it’s everywhere.  Winning is much more important now than how we play the game, and frankly that means sportsmanship is always going to suffer.  Winning in college sports is more important than the education our children get.  And this is sickening to me as an educator. Ethics is going to fall by the wayside with a win no matter what philosophy.

And of course since win at any cost is the de facto philosophy, then buying a winner becomes a chief option. Never mind that it isn’t fair or equitable to allow major market teams to buy up all the best players and win most of the championships. Never mind that.  Just win baby win, at whatever the cost.  If owners and coaches take unfair advantage of other teams or even cheat (did that prospect we traded you really have an ACL tear— Gee, we didn’t notice), what then should we expect of players in any case?

And what in the end helps exacerbate this process is the flow of far too much money.  Ridiculous amounts of money are spent on stadiums, players, uniforms, even managers or coaches not to mention sports agents. Greed is rampant, and we allow this to go on by supporting it, by paying outrageous prices for game tickets of all sorts. And don’t even get me started about sports betting and how that has poisoned the games, even drawing referees into its pernicious web.

I remember a day when a player would not accept a point, or a trophy, or an award if he thought it had been unfairly won. I remember watching a soccer match  in England where there was a hand ball situation, which of course is illegal.  The ball had caromed off of Trevor Brooking’s hand into the goal, and instead of walking away, he went over to the referee and told him it was a hand ball and the goal was disallowed.  He didn’t want to win ‘by any means necessary’.  You wouldn’t see much of that sense of fair play today. To me the most emotional sports story of last year was the girls softball game where a girl hit a home run and couldn’t run as she injured herself coming out of the box, and so the other team carried her around the bases, and lost because of it!  Now that is what I am talking about when I refer to sportsmanship and ethics.

There is a kind of winning that violates the spirit of fair play, the spirit of sportsmanship, the spirit of the game, and we have increasingly condoned that sort of winning in my lifetime.  I am unpersuaded by the argument that ‘everybody else’s doing it, and therefore to be competitive and win I must do it as well’. There is winning well, and there is winning poorly. Their is honest winning, and winning by cheating, and there is nothing good to be said about the latter.    But this begins with the ethics we teach our children when they play their games.

I am tired of seeing parents pushing their children beyond all limits in sports leagues, in part to live out their own fantasies of winning that they had not achieved in their own right.  I am tired of Christians compromising their real priority of nurturing their relationship with God and the body of Christ to instead ‘support our children in the Sunday morning soccer league’.  I can remember a time when there were no such leagues.  When Sunday morning was holy time not play time.  And I am all for a balance of work and play and worship. We need to have such a balance, which is why I have recently written a little book on a Christian theology of work and play.

But there is a price to pay for victory at any cost. If you win quite specifically by violating your own ethical principles it is a pyrrhic victory at best.  You have been cheapened not enhanced by such a victory.  You have sold your soul for fame that is fleeting.   Think about these things.