FRACTURED FAIRY TALES FROM THE FARM NO. 4 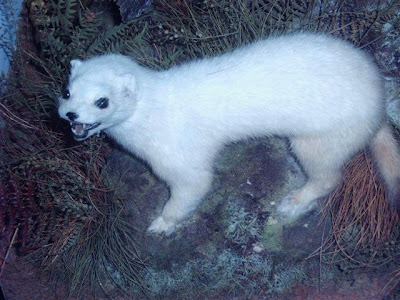 Meet the vermin, aka varmint, aka varmin. He is a fearsome critter, but his pelt is much in demand. And in fact, the fur industry has given this animal an extreme makeover, by taking away the first letter of his name. They call him the ermin. Don’t be fooled by this P.R. move, they knew that the name vermin had negative connotations and would never sell. Their ‘rebranding’ is about as reliable as those labels inside of furs that say 100% pure mink or the like. The vermin has had an identity problem from the start because various people have used this term in a non-technical sense to refer to any creature that is a pest. For example, in Australia farmers call the wild rabbit a ‘varmit’. No wonder the poor vermin is confused. Between misidentification and the rebranding of the fur industry anybody could be confused.

One of the great problems in nature is human interference. We are all the time taking species of animals outside their native habitats and placing them where they don’t belong, where they have no natural enemies, and multiply too rapidly. Take for example the case of ‘so-called’ ermin wraps. One woman goes out to Needless Markup (my name for the store), and buys a shoulder wrap made of pure vermin fur. Next thing you know both her neighbors are envious and they want one too. Pretty soon they have proliferated prodigously all over the city, and there is no returning them to their native habitat, shoot you can even return them to Needless Markup. It becomes an epidemic. This explains the old southern expression ‘a fur piece’, as in they live a ‘fur piece’ from here. Contrary to what you think, this means ‘living only the length of a fur wrap from me’, and it is used as a unit of measurement because some folks measure themselves by how big a fur wrap they can afford to have. Imagine that, people measuring their worth by the expense of their possessions. What’s the world coming to?

What is a vermin really? Its not a rabbit or a mouse, or an ordinary pest, its a long-tailed weasel. Need I tell you that the fur industry definitely couldn’t sell weasel-wraps due to the negative connotation of the word weasel. So they weaseled out of that deal by calling it an ermin, or as the French prefer ‘le ermine’. One place this weasel was introduced into is New Zealand, to control the rabbit population. But this had an unintended effect. The vermin took a likin’ to kiwi fruit, and the whole country almost had to rename all their sports teams that they like to call the Kiwis. You can see what I mean about it being a mistake to take a critter out of its native habitat where it has natural predators after it.

In Europe in fact this critter has another name– the stoat (no not the Stout, that’s a beer, or at least a beer belly). One of the odd facts about this animal whose pelt is so widely loved, is that in fact it is a member of the SKUNK family. Yes, you heard me right, the skunk family. Can’t you just hear someone saying “Don’t you just love my new skunk-fur wrap?” To which the proper but impolite reply should be “No, it stinks if you ask me.” The vermin/ermin/skunk is a noturnal creature, which explains the tendency to only wear the wrap to evening functions. But I must report to you a very alarming development. Now people are using the vermin for food.

Now I am not talking about the kind of folks who scrap up roadkill from the side of the highway and cook them. I have a tin of that I bought in Tennessee in my office, and I am not referring to that old Southern practice. No, I am referring to using weasel parts to make pasta! Yes, you read right— pasta.

Perhaps you’ve heard of it— vermincelli??? It’s real thin, kind of like angel hair pasta, and I have been told that what it actually is is vermin whiskers that have been battered up and cooked into a hard yellowish consistency. Turns out the vermin can be both the meat and the noodles in your spaghetti if you so choose. Who knew? Meditate on these things, and take some action. Don’t try and weasel out of your responsibility either. Just look at that picture at the top here and those fearsome teeth, and do the right thing, at night of course. Otherwise your spouse will notice when you snag her wrap out of her closet and take it to Goodwill.

Question from alert reader Kimberley from Vancouver B.C. Kimberley wants to know, where does the Easter bunny come from? Thanks for this question Kimberley, and I will resist telling you ‘from the same place as Santa’ because that would be a fib. In fact they come from Easter Island of course.

FRACTURED FAIRY TALES FROM THE FARM NO. 3
archives most recent
More from Beliefnet and our partners
previous posts