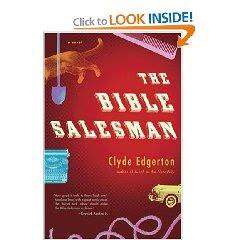 There are a plethora of southern writers like Clyde Edgerton who continue the particular tradition of southern fiction that William Faulkner, Tennessee Williams, Flannery O’Connor really established in the 20th century. What these authors and this tradition has in common, besides their clear immersion in Southern culture is the deep indebtedness to the Biblical narrative and an ongoing recognition of the importance of that narrative to Southern culture, and their ability to see both the serious and humorous side of this indebtedness. Edgerton is a Professor of Creative Writing at UNC- Wilmington. A native North Carolinian (born in Durham),there is clear enough evidence in his work that he has imbibed lots of good ideas from other North Carolinians like Thomas Wolfe, O. Henry, Doris Betts, Reynolds Price to mention only a few. One of the things he clearly shares with these writers is the ability to spin a good yarn, and in my estimation ‘the Bible Salesman’ is his finest effort thus far.

“In this rollicking, rambling road novel of the post-WWII South, Preston Clearwater, a dead ringer for Clark Gable, steals cars and passes himself off as an undercover FBI agent. His mark is naïve 20-year-old Bible salesman Henry Dampier, whom Preston convinces to drive the cars to various paint shops (telling Henry that they have infiltrated a car-theft ring), while Preston follows in his own legally registered Chrysler. Preston undertakes more audacious forms of crime, while earnest Henry has a reunion with his fundamentalist family, listens to his cousin’s scheme to market a new ad gimmick (called the bumper sticker), falls in love with roadside fruit-stand proprietor Marlene Greene and even manages to sell a few Bibles along the way. The hitch is his involvement with Preston: Henry will have to get wise to preserve all he has gained. Too many flashbacks to Henry’s Baptist roots slow him down on the way to the novel’s suspenseful climax and moving epilogue, but the result is one of the better takes on Southern Bible salesman buddy stories since Moses Pray and Addie Pray of Paper Moon.”

I quite agree with the critique there are too many flashbacks, and the prose is very sparse. Not a lot of description, but then this may reflect that the book is basically from the point of view of young Henry Dampier who, while smart in some respects, is certainly not well educated. I remember well the door to door Encyclopedia Britannica and Bible salesmen. In fact I had friends in college who did this in the South for a summer job, and as they said, “it’s an education” in people and coping if nothing else. Henry is a person who certainly has a Christian upbringing, and Edgerton gets right the way that permeates much of Southern culture in the 1930s-through 50s which is the time frame of the book. Henry however is also a bit of a rascal. He orders free copies of Bibles, cuts out the front page indicating they are complimentary copies, and then sells them to make a living. And his sales skills are pretty good.

But Henry is also extremely naive and so is literally taken for a ride and then enlisted as a driver by a car thief vet of WWII who calls himself Preston Clearwater. Their various adventures across the South are interesting and sometimes comical, but what makes this book a must read for Christians and especially those who teach the Bible are Henry’s life long struggles with trying to reconcile what they taught him the Bible says in church at home on the one hand, and what the Bible actually says on the other. The Bible, especially if you start at the front and with the patriarchs can quite readily trip a Christian up, and if you get to something like Song of Solomon it may make the wheels come off the car altogether. Henry ponders why the two creation stories in Gen.1-2 differ (one says animals then humans created, the other says the reverse order), why it seemed fine for Abraham to have sex with Sarah and also with Hagar, why it was apparently o.k. for Solomon to have all those concubines, why Song of Solomon was even in the Bible and so on. In other words, Henry’s version of Christianity was the southern genteel sort he learned at home and Sunday school, which did not very readily match up with some of the more R rated stories in the Bible, especially when he began to experience raging hormones and was looking for a Biblical justification to do what he felt the urge to do with his first major girl friend– Marleen Green.

I appreciate that Edgerton gets the Southern cultural aspects right, including the whole inlaws and outlaws and extended family nature of the culture, and one has growing sympathy for Henry whose mother abandoned him and he was raised by an Aunt who did her best. The humor in this novel is Southern humor and it hits the mark it is aiming for, certainly. If you are looking for fiction like this that is laugh out loud funny I would recommend Ferrel Sams short stories entitled “The Widows Mite” (which all by itself is worth buying the book), and if you are looking for more serious and profound reflection on Southern religious culture read the short stories of Flannery O’ Connor.

But Edgerton paints well and paints true the portrait of the old South white culture in the period he attends to and ably shows its ironic, paradoxical, and humorous side all the while letting us see that the Bible is a book which will challenge the socks off of even a culture as profoundly influenced by Christianity as that ole Southern culture. As Henry would put it– “there’s stuff in the Bible they could never show in a PG rated film, and which nobody talks about”. It shore is confusing for those who dip into the Bible only now and agin.